Rosetta's "Jewel in the Sky"

Courtesy calls to asteroids are relatively routine for NASA's interplanetary spacecraft — they've logged seven so far, dating back to 1991. 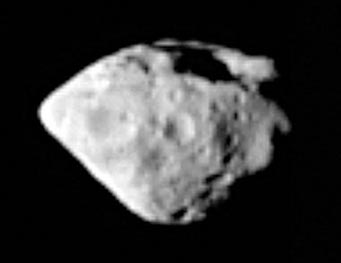 Rosetta captured this view of asteroid 2867 Steins from a distance of 500 miles (800 km) on September 5, 2008. The asteroid is 3.7 miles (5.9 km) long. Note the large crater along the top edge. Click here to view a sequence of six images acquired during the flyby.

But for the European Space Agency, flying past one of these rocky bodies is wholly new territory. So you can understand why European planetary scientists are thrilled with their Rosetta spacecraft, which yesterday zipped past minor planet 2867 Steins at 18:58 Universal Time (2:58 p.m. EDT). All told, 15 different experiments gathered measurements during a brief encounter 224 million miles (2.41 astronomical units) from Earth.

The meeting wasn't particularly fast as flybys go, under 5½ miles per second, but Rosetta's ability to follow a rapidly moving target limited the closest approach to 500 miles (800 km). Even from this distance, the main camera should have recorded surface details only 100 feet (30 m) across during a "movie mode" that snaps images every 2 seconds.

However, an as-yet unidentified software parameter caused the craft's highest-resolution camera to shut itself down unexpectedly 9 minutes before the flyby. The instrument returned to normal operation a few hours later, but the best shots were irretrievably lost.

Fortunately, a wide-field camera continued clicking away — showing an angular, heavily cratered body that, from one angle, looked a bit like a classic, brilliant-cut diamond suspended in space. See ESA's movie of the flyby. "We've observed a new jewel in the solar system," commented H. Uwe Keller, principal investigator for the OSIRIS camera. Steins turns out to be a bit bigger than expected, measuring 3.7 by 2.5 miles (5.9 by 4.0 km) and a bit darker too (35% reflective).

Like most of the other asteroids seen at close range, Steins is one beat-up piece of interplanetary real estate. The images show a pair of craters more than 1 mile across, along with a curious seven-crater chain. Most likely, Keller says, this body is shattered throughout its interior.

To the eye, Steins looks bright gray. Based on spectra gathered prior to the flyby, astronomers had classed it as an E-type asteroid, with a surface dominated by the silicate mineral enstatite. Steins is the first E asteroid to be seen up close. Most likely it's a fragment from the crust of a much larger body that melted throughout eons ago before being shattered to smithereens. 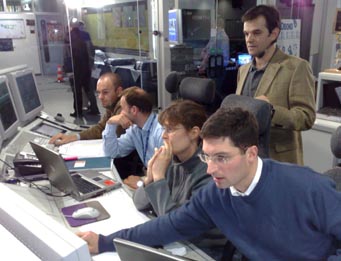 Andrea Accumazzo, flight operations manager for the Rosetta mission, looks on as four members of his engineering team monitor the spacecraft during its flyby of asteroid 2867 Steins. The control center is located in Darmstadt, Germany.

Since Rosetta also targeted Steins with its mapping spectrometer, mission scientists should be able to discern whether the asteroid is a close spectral match to distinctive, enstatite-rich meteorites called aubrites.

Launched in 2004, Rosetta wasn't designed to be an asteroid chaser — it's en route to an extended rendezvous with (and a landing on!) Comet 67P/Churyumov-Gerasimenko in May 2014.

The spacecraft's circuitous trajectory, involving three flybys of Earth and one of Mars, also includes two asteroid flybys to give scientists and their instruments some target practice. The second of these, with much larger 21 Lutetia, is still two years away.