Royal Birth Heralded by a Supernova?

My high-school astronomy class has just started chewing on supernovas, and in ticking off the recent bright ones I come up with a fairly short list. There's SN 1987A, of course, though its far-southern declination rendered it invisible to northern observers. Not so with the big bangs in 1572 and 1604, which were chronicled in Europe by Tycho Brahe and Johannes Kepler, respectively. And we have Chinese skywatchers to thank for records of "guest stars" in 1006 (arguably the brightest star in human history) and 1054. 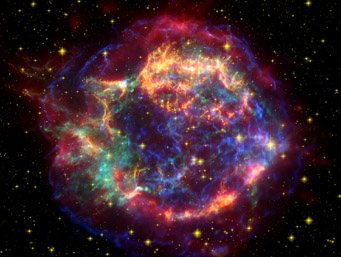 Located 10,000 light-years away, Cassiopeia A is the remnant of a once massive star that died in a violent supernova explosion about 350 years ago. This view combines infrared observations from the Spitzer Space Telescope (colored red); visible data from the Hubble Space Telescope (yellow); and X-ray data from the Chandra X-ray Observatory (green and blue).

But missing from my list is the supernova that led to the formation of Cas A, a dramatic remnant about 11,000 light-years away that's the brightest radio source in the sky. The problem is that there's no solid evidence that anyone witnessed the star's demise. By running the observed expansion rate in reverse, astronomers estimate that the explosion's burst of light should have reached Earth about 1667. Surely this event should have been the talk of the scientific world back then, but astronomers left no such "huzzahs" in their observing logs.

One clue comes from John Flamsteed, Britain's first Astronomer Royal. On August 16, 1680, he logged a 6th-magnitude star in Cassiopeia that's not there now. In 1980, William B. Ashworth Jr. posited that 3 Cassiopeiae, as Flamsteed had labeled it, was in fact an inadvertent sighting of the supernova. But Flamsteed didn't call particular attention to it, and his carefully recorded coordinates for 3 Cas don't really match where the supernova would have appeared. 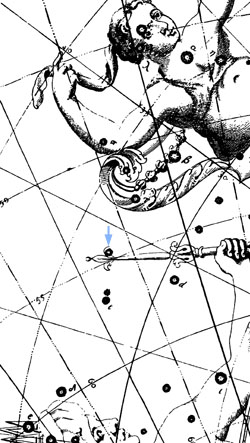 In 1680, John Flamsteed recorded a 6th-magnitude star (arrowed) in Cassiopeia that he designated 3 Cassiopeiae and later included in his 1729 atlas. But there is no such star in this location — could it have been a supernova?

Now for something really different! This week, at the annual meeting of the Royal Astronomical Society, British astronomer Martin Lunn and American historian Lila Rakoczy tossed out a radical new idea. They argue that the supernova was widely seen on May 29, 1630 — the birth date of Great Britain's future king Charles II. As Lunn notes in an RAS press release, "The number and variety of sources that refer to the new star strongly suggest that an astronomical event really did take place."

So how is it that royal historians noted the appearance of a star bright enough to be seen in broad daylight but astronomers of that era (not to mention astrologers) did not? All of Cassiopeia is circumpolar from England's latitude, so it surely should have been obvious in the nighttime sky. Moreover, could the dating of the Cas A supernova really be off by more than 10%?

I suspect we haven't heard the last of this story!

Wasn't the appearance of a supernova usually associated with a calamitous event? Surely, no royalty would want the birth of Charles II to be thought of as a 'disaster'!

I don't know about JM's hypothesis that this supernova was deliberately ignored, but the birth of Charles II of England certainly did herald a period of calamity. His father, Charles I, was overthrown and beheaded by Cromwell's puritan roundheads. Charles II spent nine years in exile, and he was restored to the English throne just in time to reign over the Great Plague of 1665 and the London Fire of 1666. If anyone was born under an unfortunate star, it was Charles II of England. But none of the stopped Merrie King Charles II from partying and enjoying the ladies.

Kelly Beatty wrote: "So how is it that royal historians noted the appearance of a star bright enough to be seen in broad daylight but astronomers of that era (not to mention astrologers) did not? All of Cassiopeia is circumpolar from England's latitude, so it surely should have been obvious in the nighttime sky." ...... This is the obvious, huge problem with this idea. The year 1630 was hardly the Dark Ages. Any supernova bright enough to be seen in daylight would have been SPECTACULARLY bright at night and circumpolar from most of the "civilized" world: from the English New World colonies including Massachusetts (thought I would throw that in for the S&T editors), from ALL of Europe, Japan, Korea, most of China, much of the Middle East and North Africa. The simplest explanation, and it's been proposed before, is that the "noon-day star" sighted by the elder Charles was Venus which was near maximum brightness that day and would have been plainly visible to anyone scanning the skies "looking for a sign", as the king and his retinue might well have been doing after the church service celebrating his heir's birth. That the Oxford dons mentioned it in their quaint verses written up in the book "Britanniae Natalis" (not a rare book, by the way) celebrating the birth only tells us that they had heard the stories already in circulation from the king's advisors. It's not independent evidence. Further those poems were acts of duty to the monarchy. They were not even remotely documents of "natural philosophy" or science. THERE WAS NO SUPERNOVA in Cassiopeia in 1630 --at least not based on the extensive evidence available to us already. But congratulations to L & R for gaming the systme and using the royal wedding to get internet news media attention for a story that would have had little traction as science.

I mentioned a few days ago here that the most likely explanation for the "star" seen by the royal party was none other than Venus. I found today a remarkably early reference to this. It's from Leadbetter's "Astronomy" published in 1727 where he wrote: "In the History of England, Fol. 62, we are told, that at the Birth of our Glorious Monarch King Charles the Second (of ever blessed Memory) a Star appear'd at Mid-day, which was suppos'd by some to have been a New Star: But alas! it was no other than the Planet Venus, as you may prove by the Instrument, if you collect the Numbers for May 29, 1630, where you'll find the Week-Day Sunday, and Venus in Taurus [8.5 degrees], with [2.5 degrees] South Latitude Ascending: She was 39 [degrees] Orient of the Sun; therefore might be seen in the Day-time." So the identification of this birth star with Venus was already considered the obvious solution less than fifty years after the reign of Charles II and less than a century after the sighting. Incidentally the coordinates for Venus given by Leadbetter way back in 1727 are essentially exact as far as naked eye observations are concerned. They are ecliptic coordinates where "Taurus 8.5" means "30+8.5" and in fact the ecliptic longitude of Venus near noon in England on June 8, 1630 [the date in the modern calendar], by the best modern ephemerides, was 38.4 degrees while the ecliptic latitude was 2.5 degrees south, just as given, and the elongation from the Sun was indeed 39 degrees.

The exact time of the birth of royalty was considerd a state secret. They thought that astrologers could use that information to find times when it would be best to attack, or to accomplish some other end. The time of birth was made vague on purpose. This could be the reason why there is some confusion throughout history, back to biblical times, as to a correct time line of events.