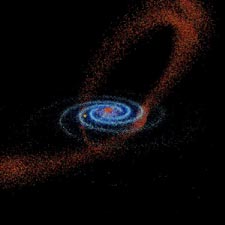 The model above is based on observations by the Two Micron All Sky Survey. The blue spiral represents the Milky Way while the yellow dot is our Sun. Long debris tails of stars extend from the Sagittarius Dwarf and encircle the Milky Way.

Astronomers have derived a new map of the Sagittarius Dwarf Galaxy, which currently is merging with the Milky Way. Steven R. Majewski (University of Virginia) and three collaborators culled 5,000 of the Sagittarius Dwarf's M-type red-giant stars from the recently completed near-infrared Two Micron All Sky Survey, or 2MASS. Among their numerous findings, accepted for publication in the Astrophysical Journal:

The Sagittarius Dwarf Galaxy would shine at an impressive visual magnitude 3.6 were its light to emanate from a single spot on the sky.

The dwarf galaxy's tidal tails — drawn out in the course of several eccentric orbits around the Milky Way — trace nearly a complete circle around the dome of the sky. Furthermore, they "show relatively little evidence for precession," implying that the Milky Way's mass (unlike its luminous stars) is distributed in a spherically symmetric manner.

Our Sun lies within just a few thousand light-years of the Sagittarius Dwarf's orbital plane, and stars that once were gravitationally bound to the disintegrating satellite galaxy may now be "in or near the solar neighborhood."

The globular cluster M54 precisely marks the diffuse galaxy's center, though "the connection between M54 and the concentration of stellar populations of a variety of ages at its location . . . is still unclear."