April 4th to 10th is International Dark-Sky Week, whose main goal is to raise awareness about how light pollution degrades the quality of the night sky. The idea for this celebration came in 2002 to Jennifer Barlow, then a high-school student in Midlothian, Virginia. 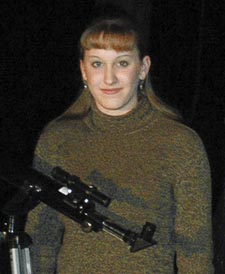 Jennifer Barlow, then a high-school sophomore in 2002, shows off her first telescope — a gift that has fueled her passion for astronomy and for preserving dark night skies.

Hers is a great story, actually. To publicize her idea, Barlow set up a website, distributed leaflets in her neighborhood, and encouraged everyone who'd listen to turn out their lights to preserve our night skies. "In order for this to work," she told us back then, "we need more participation."

Time has marched on, and Jennifer is now a graduate student studying Spanish literature at the University of Virginia. "I am still very much interested in astronomy!" she tells me. "On the first and third Fridays of the month, I volunteer at the UVa's McCormick Observatory for public night, where people can come look through the 26-inch refractor." She didn't end up pursuing astronomy as a career, but then again few of us ever do. "I know it will always be a huge part of my life," Barlow assures me, "and I'll always have a deep appreciation of the night sky."

Be honest: how many of you have ever heard of National (now International) Dark-Sky Week? What does it take for an idea like hers, arguably a very good one, to gain popularity?

For comparison, you've probably heard of — and maybe even participated in — last month's Earth Hour. Begun in 2007 by the Australian branch of the World Wildlife Fund, the idea of turning down/off the lights for one symbolic hour has become a worldwide phenomenon. Earth Hour's website boasts that it had participants in more than 100 countries; here in the U.S., even parts of the gaudy Las Vegas Strip went dark this year. 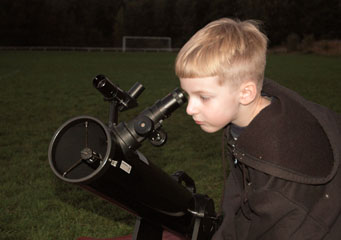 A budding stargazer takes a peek during a locally organized star party in Chelmsford, Massachusetts.

So why hasn't IDSW become more popular? After all, there are something like 700 astronomy clubs in the U.S. alone and maybe another 1,000 worldwide. Wouldn't this be a perfect time to take the dark-sky message to the public, to people who've heard of light pollution and would be sympathetic to the cause?

Here's my take: everyday citizens, and even amateur astronomers themselves, are becoming saturated with organized "celebrations" of astronomy. This isn't to say that 2009's International Year of Astronomy wasn't worth the effort — we should bring the wonderment of professional and amateur astronomy to every corner of the world. Indeed, the success of the IYA has spawned an encore of sorts, Global Astronomy Month, which is going on right now.

These special cases aside, it's clear that the number of public-targeted outreach efforts has swollen in recent years. Topping the list is the granddaddy of such events, Astronomy Day. Begun in California during the 1970s, "A-Day" is now coordinated by the Astronomical League. This year's observance is coming up soon, April 23rd. Yet as of today, only 20 clubs have notified the League that they plan to have events this year. Surely others have something in the works, but how would someone find out about them?

This year has already seen a number of other broad-based celebrations. Back in March there was Globe At Night, followed in quick succession by International Sidewalk Astronomy Night and Earth Hour. Later this year (October 16th) will be a second Astronomy Day and perhaps another Great World Wide Star Count.

All of these efforts are worthwhile. But is anyone really paying attention to them? Did you, or will you, participate? Let me know your thoughts via the comment section below.

Our club, the Astronomical Unit, will be setting up all day for Astronomy Day (April 24) at the Santa Barbara Museum of Natural History. People can find out about a lot of astronomy public outreach activities, not just the big ones, via the Night Sky Network (http://nightsky.jpl.nasa.gov/).

Hello,
Whenever we organize a public event with the purpose of showing the heavens, there's a major issue: weather.

So many times, we have prepared a party only to find a few persons showing up because of bad weather.
I have dropped doing public events from 2001 to 2008 because of that, but then came light pollution events and the IYA 2009.
OTOH, we can be nicely surprized by last minute events (such as the Venus-Mercury conjunction for which I biked to the port of Antwerp for the best view, but then, I was alone). Friends from my club give astronomy lessons in schools and that has huge impacts (the children, their parents and the teachers) because we can mix inside events with outside ones.

Instead of too many events, I believe we don't have nearly enough to keep the momentum building!
Think of what sports fans demand and get!
They get awesome professional stadiums, players get astronomically-sized salaries, games & teams get daily coverage & analysis from every media on the planet, and every community has sports programs for the kids with playing fields in the neighborhood parks and schools. This is a heck of a lot of attention where the tickets to a pro game are expensive and the chances of your little kiddle making it to the big leagues are so small.

Compare that to observing the night skies--where the sky is free and limitless. We need to speak up and demand that our community parks serve double duty day & night. Expensive tennis courts and baseball fields can be designated as official StarPark observation sites at night. Light trespass and pollution, even over our national parks, has been the accepted norm for too long. Wasteful, harmful lighting needs to be put in check. It won't happen on it's own... it won't happen until WE make it happen.

We can best respond locally when we are energized globally. Developing fluid global programs and collaborations is the key to solving the global problem of light pollution. IDSW, Global Astronomy Month, virtual telescope webcasts, sidewalk astronomy and others are all building toward the momentum we have yet to experience. "One Star at a Time" and the Global StarPark Network will soon be launched and hopes to add to this global focus.

Organizations and individual amateurs choose the events that personally appeal to them but collectively we are all building interest in astronomy. Do we all have to participate in each event? No, we all do what we like and contribute in our own way. ISAN started becasue many Sidewalk Astronomers wanted to celebrate what we do and encourage others; do we expect all amateurs to participate? No. We do recognize the growth in the number of events and we've combined ISAN with the 100HA global star party and in the future will probably combine it with other international observing events, adding a sidwealk component. Whether your interests are local or global, physical or online, observing or photography, there is sure to be an event for you. This was central to the planning of GAM, to be as inclusive as possible and offer as much flexibility, choice and innovation as possible.

Thanks for asking some good questions, Kelly! But I have a different take on the answers. True, Astronomy Day doesn't have many events but for last year's 100 Hours of Astronomy, which I organized, we had 2400 events registered in 99 countries, and many more we knew about that weren't registered. Amateurs came out by the tens of thousands so they're certainly not jaded by too many events! So what's the difference? Astronomy Day does little advertising and amateurs in most countries don't take part. But more importantly it asks the regular sidewalk astronomers to do star parties, something they're already doing. They're preaching to the choir. The Global Star Party in 100 Hours was billed as one big event with everyone joining in. And that's the difference. People want to be part of something more than their own event. Earth Hour is the same. If you ask people to turn off their lights for an hour some time during the day, few will do it. Do it together and you're part of an important global event. Before 100 Hours, some planetariums said they didn't need to do anything special because they're doing astronomy outreach every day, but when they saw how big the event was growing they jumped in. This is the philosophy behind Astronomers Without Borders and the global programs taking place during Global Astronomy Month (GAM) and beyond. Grassroots efforts that engage everyone. And most importantly, connecting astronomy enthusiasts around the world in a community. When someone suggests an event, others join in, even when they're on different continents. As for Jennifer and IDSW, we're featuring it in GAM and intend to do more. Jennifer alone can't make it happen -- she can't reach enough people -- but the Astronomers Without Borders global community can, and we'll have new dark skies programs to give people something they can do to be a part of it. One people, one sky. http://www.astronomerswithoutborders.org