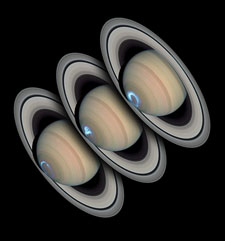 The Hubble Space Telescope (HST) and Cassini spacecraft paired up to capture Saturn's aurora during a solar-wind storm. Ultraviolet HST images (overlain on Cassini's color view of Saturn) show the auroral halo brighten and spiral in on itself, an effect not seen in terrestrial or jovian auroral displays.

As any seasoned night-sky observer will tell you, the best time to glimpse an aurora is directly after a solar storm. And what's true for Earth, astronomers recently learned, is also true for Saturn. However, three papers published in the February 17th issue of Nature suggest that Saturn's aurorae behave much differently than those here on Earth, or anywhere else in the solar system.

The Hubble Space Telescope (HST) took these spectacular ultraviolet images of Saturn's southern hemisphere region over a period of several weeks in January 2004. The Cassini spacecraft, then en route to the ringed planet, simultaneously received radio emissions from the auroral display and detected an associated rise in solar-wind particles. Like on Earth, solar magnetic storms push charged particles past Saturn at more than 400 kilometers per second (about 1 million miles per hour). These energetic ions warp around the planet's protective magnetic field.

Earth's aurorae occur when the magnetosphere captures charged solar-wind particles and then funnels them toward the magnetic poles where they collide with atmospheric particles along the way. The impact releases energy across the electromagnetic spectrum and, as seen from space, appears as a visible-light oval ring around each pole. During intense storms, this oval expands outward from the north and south poles, extending to lower latitudes.

Saturn responds to the solar wind in a different way. Its auroral region brightens as the solar-wind pressure increases, but the oval contracts during storms. "The ring doesn't catch up to itself," says John T. Clarke (Boston University), lead author of one of the Nature papers. In fact, during the observations the ring became more like a spiral. 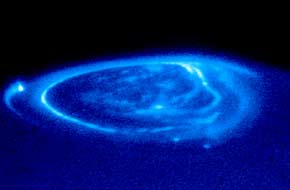 This Hubble Space Telescope image shows 'footprints' on Jupiter induced by Io, Europa, and Ganymede. The footprints, which appear as bright dots, are embedded in an auroral glow circling Jupiter's north pole.

A similar spiral pattern is observed in Jupiter's aurora, coinciding with the inner moon Io. The volcanic satellite generates a magnetic field within Jupiter's magnetosphere, distorting the aurora. It is possible that Titan, Saturn's largest moon, could be interfering with the magnetosphere much like Io influences Jupiter.

On the other hand, NASA's Galileo satellite observed that the solar wind has little influence on massive Jupiter. Instead, magnetic currents of Jupiter's molten hydrogen interior drive its auroral activity, and the ring of light circling Jupiter's poles is fixed with the planet's rotation. Saturn's rapid revolution and jovian-like internal core suggest a similar process. And much like Jupiter, the Saturn's aurorae last for several days and sometimes appear to corotate with the planet.

But the planet's axial tilt, nearly 26°, makes the ringed planet unique. The orientation of Saturn's magnetosphere with respect to the solar wind's incoming angle may also have an affect on its auroral concentrations. "We are currently running more HST observations," says Clarke, "maybe we will learn more from that."