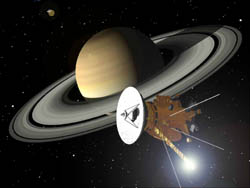 The Cassini-Huygens spacecraft arrived at Saturn on July 1, 2004 (Universal Time) and became the planet's first artificial satellite. In this artist's rendition, sunlight glints off the craft's magnetometer.

The first 61 pictures relayed by the Cassini-Huygens spacecraft after reaching Saturn show that there is much scientists don't understand about the planet's dazzling rings. But no less surprising were early returns from Saturn's vast magnetosphere, the invisible bubble of magnetic fields, electric currents, and trapped radiation far larger than the ringed planet itself.

One major puzzle arose months ago, when the still-far-off spacecraft first detected the planet's radio "pulse." Because Saturn's clouds offer no way to gauge the planet's true spin rate, scientists instead rely on periodic bursts of long-wavelength radio energy linked to Saturn's magnetic field and, by implication, its deep interior. These bursts were detected as early as April 2003, and they show that the planet spins once every 10 hours, 45 minutes, and 45 seconds. But that's about 6 minutes slower than the rate clocked when the Voyager spacecraft called on the ringed giant in 1980 and 1981. Donald S. Gurnett (University of Iowa) says he and other members of the Cassini Radio Plasma Wave Science team have no idea why Saturn has slowed down.

As the spacecraft drew closer to the planet, it repeatedly crossed a shock front on the planet's sunward side. This bow shock marks where the solar wind, flowing outward from the Sun at supersonic speed, is abruptly slowed, heated, and redirected to avoid colliding with Saturn's magnetosphere. According to William Kurth (University of Iowa), the spacecraft first crossed this threshold at a point nearly 3 million kilometers from Saturn — half again farther out than the bow shocks observed a quarter century ago by Pioneer 11 and Voyagers 1 and 2. "It's as if the bow shock came out to meet Cassini," comments Kurth. The shock front swept back and forth seven times, he added, a consequence of the tug of war that continually goes on between Saturn's magnetosphere and the highly variable solar wind.

Although hard-pressed to compete with his imaging-team colleagues for pure dazzle, Stamatios Krimigis (Applied Physics Laboratory) has found a way to visualize some of the planet's electromagnetic activity. Cassini's Magnetospheric Imaging Instrument can take snapshots of the entire magnetosphere using the "glow" of energized particles trapped in the planet's magnetic field. This big-picture view showed a sea of particles completely enveloping the region surrounding Saturn and extending out roughly 1½ million km, well beyond the orbit of Titan.

Titan itself has not yet received much attention, but that will change in the months ahead. The big moon will get its first visit from Cassini-Huygens on October 26th, a 1,200-km miss that will significantly alter the spacecraft's trajectory and cut its orbit time around Saturn in half, from 116 days to just 60.