If decades of solar-system exploration have taught us anything, it's that satellites are even more diverse (read: "weirder") than the planets they orbit. 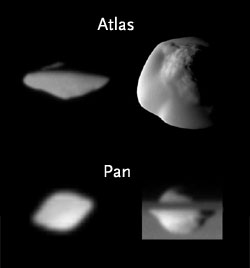 The Cassini orbiter's best views to date of the ring-hugging Saturnian moons Atlas (26 miles across) and Pan (22 miles) reveal their distinctive flying-saucer shape.

Take the moons of Saturn, for example. Titan has a slushy surface and an atmosphere denser than Earth's. Iapetus has one black-as-coal half and one white-as-snow half. Hyperion looks like a giant sponge, and tiger-striped Enceladus is spewing out its own ring.

Now there's something new in the Saturnian zoo: flying saucers. Well, at least that's what the little moons Atlas (which orbits just outside the A ring) and Pan (inside it, within the Encke Division) look like.

In the December 7th issue of Science, French researcher Sébastien Charnoz and three colleagues explore how these two moons might have gotten their remarkable shapes. The thinking goes that each moon started out as a smaller core than was more or less round, and then they got fat around the middle — what the authors call "terminal accretionary ornaments" — by accumulating nearby ring particles. 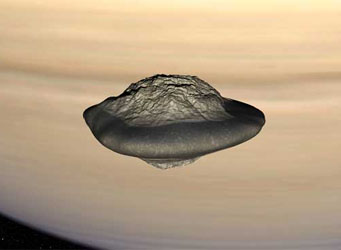 This frame from a 29-MB animation shows how Atlas has a smooth equatorial bulge (likely an accumulation of ring particles) and rougher polar regions.

More broadly, the small moons in and near the rings (Atlas, Prometheus, Pandora, Pan, and Daphnis) may have assembled from low-density ring stuff. In a second article, Carolyn Porco, who heads Cassini's imaging team, and three others contend that all five have densities of 0.38 to 0.45 g/cm3 — less than half that of water ice.

So while their centers may be solid, their exteriors can't be. That's because the moonlets gobbled up all the ring matter around them, opening up small gaps in the rings in the process. Now Pan and Daphnis are too far from the ring particles to pull any more onto themselves, meaning they're as big as they're going to get. The proof would be confirming that the moonlets and the rings near them have the same composition, but that still needs to be done.

You can get more details from NASA's press release, but be sure to check out the posting (and cool video) by France's Service d'Astrophysique: