Jay Pasachoff blogs about his experience at the second week of IAU's General Assembly in Beijing, taking in talks on everything from the age of the universe to the history of sunspots.

The second week of the IAU General Assembly here in Beijing boasts a brand new set of symposia covering topics ranging from the age of the universe to brand-new exoplanets to the discovery of magnetism in sunspots.

How Old is the Universe? 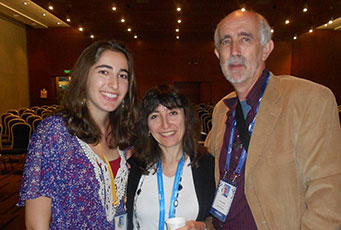 Wendy Freedman poses with her husband, Barry Madore, and their daughter Rachel. Freedman had just finished her talk on the complex task of directly measuring distances to objects in the far-away universe, a task crucial to measuring the Hubble constant and ultimately the age of the universe.

I started the week by listening to Wendy Freedman (Carnegie Observatories), as she outlined the many complex ways astronomers have measured cosmic distances. Freedman is famous for her work in determining the Hubble Constant, which tells us how quickly the universe is expanding and how old it is now. For much of the second half of the 20th century, including when I started writing my textbook, astronomers had been fighting over whether the Hubble constant was 50 or 100 — a number so uncertain that the universe might have been anywhere from 9.7 billion to 19.4 billion years old.

In a landmark 2001 paper, Freedman and her colleagues used the Hubble Space Telescope to tighten the constraints on the Hubble constant, and therefore the universe’s age, to an unprecedented degree. From high-resolution images of galaxies as far as 71 million light-years from Earth, Freedman picked out pulsing stars called Cepheids, whose beats in brightness relate to their intrinsic brightness and thus their distance. Her method gave a direct measurement of the Hubble Constant with an uncertainty of only 10%: 72±8 (in astronomers’ units of km/second/megaparsec), which suggests a universe roughly 13 billion years old. The Hubble Constant has since been derived more precisely. Data collected by the Wilkinson Microwave Anisotropy Probe (WMAP) gives the current age of the universe as 13.7 billion years, but does so through an indirect method. Freedman’s method makes fewer assumptions and is the most direct measurement of the universe's expansion.

Freedman described several of the dozens of direct measurements that have since improved the uncertainties down to about 3% — future methods should reduce the uncertainty to 2% within a few years, which should help astronomers decide among cosmological models. Later speakers showed values from various methods that give a Hubble constant closer to 74, which would make the universe 350 million years younger than the current estimate.

On Tuesday, Natalie Batalha (San Jose State University), the deputy science team director of NASA's Kepler mission, highlighted the strengths of Kepler’s data treasure trove. For the past three years, Kepler has been staring at more than 100,000 stars, looking for a dip in brightness that might indicate a planet crossing in front of its host star. Kepler has found over 2,321 candidate exoplanets to date, but only 77 of these are confirmed to be exoplanets. Batalha talked about the many ways that something else — such as grazing eclipses by double stars of each other or background eclipsing binary stars — could look like an exoplanet to Kepler.

Let’s say one of Kepler’s stars lies confusingly close to a faint eclipsing binary system, so Kepler sees all three stars as one. The eclipsing binary stars regularly block each other’s light, causing a dip in brightness that mimics the transit of an exoplanet. Fortunately, Kepler takes so many pictures that multiple images can be subtracted from one another, revealing the dip in brightness to be off-center. A transiting exoplanet would be centered on the star, but an off-center source is more likely to be a background source. Thanks to techniques like these, Kepler should have a high success rate in its planet detections. 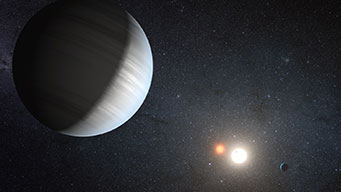 An artist's illustration shows a possible view of the Kepler-47 system, where two planets — one super-Earth and one Uranus-sized planet — orbit two stars — one Sun-like and the other a red dwarf.

In a later talk, William Welsh (San Diego State University) revealed the discovery of two new planets orbiting a binary star system. The application of freshman physics was fun: if a planet goes around a single star, the transits (seen as dips in the star's brightness) will be regularly spaced. But if the central star is in a mutual orbit with a companion star, it will change position over time, so the planet has to travel a bit further in its orbit to be in our line of sight, or the planet may cross the star earlier in its orbit. So the scientists deduced the presence of a double-star system from the irregularities of the transits.

The History of Magnetism in Sunspots

The next day, Brian Gaensler (University of Sydney) gave a talk on The Origin and Evolution of Cosmic Magnetism. One item in his historical introduction struck me especially.

In 1908, George Ellery Hale presented evidence that the dark spots that dot the Sun contained strong magnetic fields — he went on to make one of his several careers out of studying sunspots and their implications for the Sun’s magnetic field.

Yet six years before his discovery, a radio instrument was built to try to detect solar radio emission. Sunspot activity increases radio noise, and it also improves how radio signals propagate. If the Sun had been at the peak of its activity cycle, the radio instrument might have succeeded in proving the magnetic nature of sunspots before Hale got a chance. Unfortunately, it was a sunspot minimum then, and the observations did not detect any solar radio radiation, which would have implied the existence of strong magnetism. 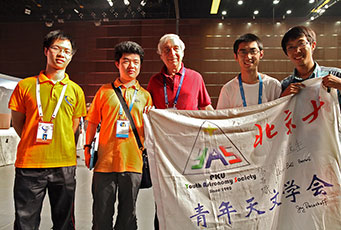