Astrophysicists have developed a new way to measure the mass of black holes, and initial results support the controversial claim that an intermediate-mass version of these strange objects exists. 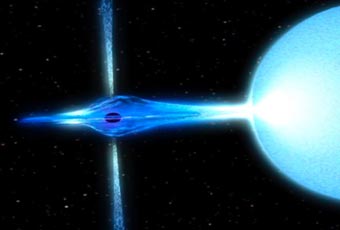 Artist's interpretation of a binary system that resembles Cygnus X-1. Gas from the blue supergiant star orbits the black hole in an accretion disk.

Nikolai Shaposhnikov (NASA/Goddard Space Flight Center) and Lev Titarchuk (U.S. Naval Research Laboratory) recently tested this method — which Titarchuk proposed several years ago — on three known black holes. One was the Cygnus X-1 binary system, in which a small, stellar-mass black hole gives off copious X-rays. Its calculated mass is 8.7 Suns (with an error margin of 0.8), close to the 10 solar masses estimated by two previous methods. These results will appear in the July 1st issue of Astrophysical Journal.

In Cyg X-1, the black hole orbits a more massive blue supergiant star closely enough to pull matter — mainly gas — from its enormous companion. This transferred gas rotates around the black hole in an accretion disk, emitting X-rays as it becomes energized and occasionally clumping together in what Titarchuk refers to as a "traffic jam." He finds that the farther these clumps form from the black hole, the more massive it is.

To find where these clumps lie, Shaposhnikov and Titarchuk monitored reoccurring X-ray variations, called quasi-periodic oscillations (QPOs), that are common to black-hole systems. The timing of these oscillations together with X-ray spectral properties allowed the two scientists to figure out the black hole's mass. 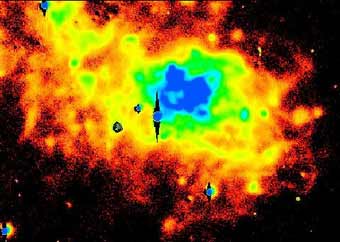 Gas in the galaxy NGC 5408 emits X-rays, as captured by the European Southern Observatory's 3.6-meter telescope. Blue indicates levels of higher intensity. (NGC 5408 X-1 is marked in the center.)

"No one's 100 percent certain of the exact physics that produces the QPOs," says Richard Mushotzky (NASA/Goddard Space Flight Center). Mushotzky, along with Goddard colleague Tod Strohmayer and others, used Titarchuk's technique to estimate that a bright X-ray source in the small, nearby galaxy NGC 5408 has a black hole with a mass of about 2,000 Suns.

Although this value agrees with previous estimates, the result has been hotly debated among researchers because there are no well-accepted models to explain how such intermediate-mass objects can occur. Stellar black holes, which form when a star collapses, weigh in from just over 3 to 20 solar masses, whereas supermassive black holes, which sit at the center of galaxies (including the Milky Way), are millions of times more massive than the Sun.

Scientists have used two other techniques to measure the mass of these enigmatic heavyweights. One uses the black hole's energy output to estimate its mass (the more luminous it is, the more massive), and the other uses the accretion disk's X-ray spectrum to deduce its temperature (the cooler the disk, the more massive the black hole). However, neither technique measures the velocities of a black hole and its companion, which would yield its mass more directly. Although Titarchuk's technique is also an indirect measurement, it "improves our confidence a lot," says Mushotzky.