This year's April Fools' was a productive day for astronomers — catch up on all the shenanigans.

Conspiracy is not just for the theorists. In what appears to be a coordinated effort stretching across several disciplines in the astronomical community, scientists today have released a boatload of befuddling results. Researchers are not yet speaking plainly about why this date (April 1st) was chosen, but those with sensitive news noses know something is afoot.

In an effort to keep our readers up to speed with developments in the professional astronomical community, we at S&T have put together a list of the most noteworthy of these news flashes: 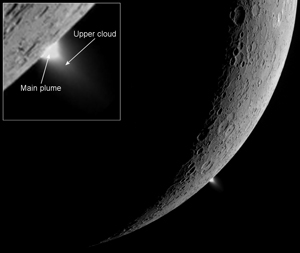 Today, on April 1st, 2013, the Messenger mission has released an image of the first active plume observed at Mercury. Is it a fire fountain? Or a geyser of volatile materials? Since ice was recently found at Mercury's north pole, it's possible that water may have been involved in the eruption, prompting the team to propose the name "Poisson d’Avril."

This announcement comes exactly one year to the day after another zinger from the Messenger team: the discovery of a natural satellite around the Iron Planet.

The Universe can be described using three numbers popular in conspiracy theory: 23, 42, and π, claim Jörg Rachen and Ute Gahlings (Rautavistische University, Germany). They conclude: "Belief in the existence of our Universe is an illusion, as previously assumed by ancient philosophers, 20th century science fiction authors, and contemporary film makers."

This theory has a personal appeal for my colleague Camille. "This could finally explain why several people in my family were born on the 23rd day of their respective birth months," she muses. "Of course, more data are needed before I could be comfortable espousing that conclusion." 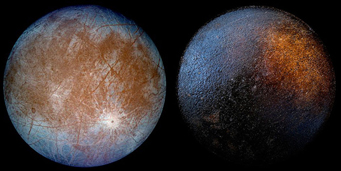 NASA's Astronomy Picture of the Day asks today's most important question: why do moons and frying pans look so much alike? Think you can tell the difference? Vote here and find out if frying pans fool you.

No one is yet suggesting that the Moon is in fact a giant frying pan floating in the sky, but at this point we shouldn't rule anything out.

The Large Synoptic Survey Telescope, due to come online in roughly a decade, will essentially create a time-lapse movie of the whole sky. (No joke.) That's all very interesting for those geeky astronomer types, but the real question is, could we use it to track visits from E.T.? 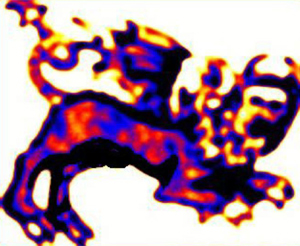 Dark Matter is a Sphinx

"The universe hosts astronomical animals aplenty," Nestor Mirabal (Universidad Complutense de Madrid, Spain) notes in his paper released in honor of April 1st. So, he concludes, dark matter substructures might resemble the mythical sphinx creature. (Don't ask why, ask why not?) The image at right shows a simulated gamma-ray map of one such dark matter clump "obtained after exhaustive visualization." If you're wondering what that (and other scientific jargon) means, check out this handy translation list of common academic phrases.

See any more exciting astronomy news that will only be true for one day? Tell us about it in the comments below!

I knew this had to be an April Fools joke when you failed to mention e on the list of important numbers. Any true scientist would not hesitate to include it on their short list! 🙂

Very good and true comment, Sam! No world without "e"! But, then again, any true scientist would have omitted the hitchhiker's guide to the galaxy number 42, wouldn't he! Same goes for 23! "Pi" and "e" alone could have had me perplexed for a split second, were there not the multitude of other hints. :-), :-], and :-}.

Si, si senores, but the list must include c!

Naturalmente! And what about G? Andale, andale!