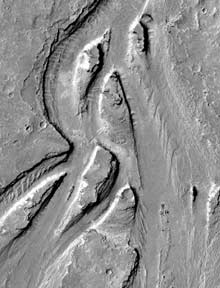 Were these teardrop-shaped 'islands' carved into the Martian landscape by a massive flood within the past 10 million years? New spacecraft findings support such a notion. This scene is about 2 kilometers across.

For decades, the "Top 10" list of Martian features has included famous places like the towering Olympus Mons volcano and the vast Valles Marineris canyon system. But if recent spacecraft observations are borne out, a winding channel named "Athabasca Vallis" should be added right away. Detailed images from Mars Global Surveyor (MGS) show that Athabasca may be where a torrent of floodwater raced across the red planet's surface in the recent geologic past — perhaps within the last 10 million years.

Located just north of the Martian equator, the channel runs across a broad plain not far from a cluster of large volcanoes. Cutting across the plain is Cerberus Rupes, a 1,000-kilometer-long tear in the crust thought to be the source of the region's extensive lava flows. Because these flows bear very few impact craters, geologists suspect them to be among the youngest features on Mars. "We're confident they were emplaced within the last 100 million years," notes William K. Hartmann (Planetary Science Institute). "The age could be less than 20 million years and, in some places, maybe only a few million years." By contrast, most of the planet's major landforms (including its largest flood channels) are bilions of years old.

Enormous flows of both lava and water have been suspected in Athabasca Vallis since the mid-1980s. Now, thanks to the detailed images and slope data provided by MGS, Devon M. Burr and Alfred S. McEwen (University of Arizona) find clear evidence for at least one enormous flooding episode. Burr calculates that water raced down the channel at a peak rate of 1 to 2 million cubic meters per second — comparable to the flow of the Mediterranean Sea into the Atlantic Ocean. In the January 15th issue of Geophysical Research Letters, the two Arizona researchers and Susan Sakimoto (NASA-Goddard Space Flight Center) estimate that a discharge of that magnitude would have unleashed more than a Lake Erie's worth of water in only a week.

Many questions remain, however. Burr believes that the floodwater emerged from Cerberus Rupes, where the channel's trough seems to originate. But other researchers think the source lies farther upstream, and that the fracture system came later. For example, the fissures themselves appear remarkably fresh (they typically have very steep slopes of more than 80°), with no signs of being worn down by floods of water or lava.

Where all that rampaging water might have ended up seems less mysterious. Burr and her colleagues suspect that it sank into the lava-covered plains almost immediately (fresh lava flows are highly porous). If so, she notes, much of that water may now lie frozen not far below ground level — making the Cerberus region an attractive candidate for future explorations by surface rovers.