As of today the count of known asteroids is 444,080, according to tabulations by the International Astronomical Union's clearinghouse for such matters, the Minor Planet Center in Cambridge, Massachusetts. The total number of finds is growing by about 10% per year. 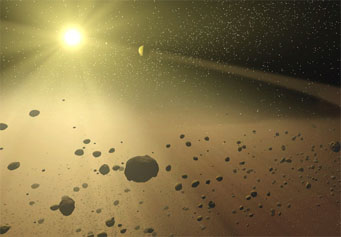 The asteroid belt between Mars and Jupiter represents leftovers from the planets' formation. The belt's initial mass was far greater than it is now — perhaps 1,000 times as much.

Yet today the realm between Mars and Jupiter is an interplanetary ghost town compared to the close packing it used to have. Recent calculations suggest that the asteroid belt has lost perhaps 99.9% of the mass it had 4½ billion years ago. Almost all of it vacated in the first 100 million years of solar-system history due to early run-ins with the planets and with massive super-asteroids that stirred up among the locals before themselves being ejected.

One ejection mechanism, first recognized by Daniel Kirkwood in 1867, involves orbital resonances. For example, asteroids circling at an average of about 2½ a.u. from the Sun complete three orbits in the time it takes Jupiter to circle once. This 3:1 coupling creates repetitive tugs on the asteroids by Jupiter that perturb them into eccentric and ultimately unstable orbits. What's left behind is an asteroid-free zone at that orbital slot. 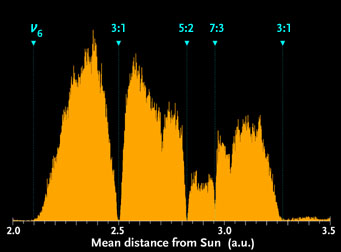 Most asteroids orbit between Mars and Jupiter, but their distribution is very uneven. In particular, several obvious "gaps" are due to orbital resonances with Jupiter. For example, an asteroid at the 3:1 resonance completes three trips around the Sun in the time it takes Jupiter to go around once. The ν6 resonance, marking the belt's inner edge, is due to Saturn. Click on the image for a larger view.

This 3:1 location, along with others corresponding to 5:2, 7:3, and 2:1 orbital resonances with Jupiter, are now called Kirkwood gaps.

The primordial demolition derby might still have left us with 10 times more asteroids than we see today, were it not for positional shuffling among the giant planets that took place about a half billion years the solar system formed. This orbital migration, first postulated by theorist Renu Malhotra in 1993, resulted from countless close encounters with small objects.

Here's how it works: Every time Jupiter heaves a small body out to the Kuiper Belt or beyond, the planet itself shifts infinitesimally closer to the Sun. Do this to a trillion times, and the laws of physics say that Jupiter simply must move elsewhere.

"This migration happened, and you ought to see evidence of it in the asteroid belt," notes David Minton, a graduate student at the University of Arizona. He and Malhotra used high-performance computers to model how migrating planets (and their migrating resonances) sculpted the population and distribution of asteroids we see today. They assumed that Jupiter moved inward by 0.2 astronomical unit (about 18 million miles) and Saturn, Uranus, and Neptune outward by an estimated 0.8, 3.0, and 7.0 a.u., respectively.

Their results, published recently in Nature, show that the distribution of the 690 largest asteroids is a good match to that resulting from migrating planets and a poor match had Jupiter and Saturn not moved at all. In particular, they find evidence that the inward-moving resonances greatly thinned the ranks around the Kirkwood gaps. 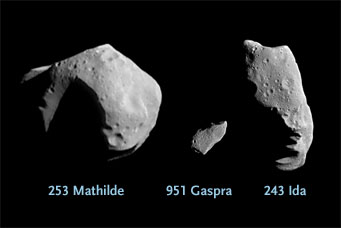 Three asteroids that have been imaged at close range by spacecraft. They're shown at the same scale; Mathilde is 37 miles (59 Km long).

Moreover, the main belt's inner edge, roughly 2.1 a.u. from the Sun, marks the final location of a powerful resonance called ν6 that's associated with the precession of Saturn's orbit. Highly sensitive to the ringed planet's orbital location, the ν6 resonance swept through the entire belt like a snowplow, scattering untold millions of objects.

As Minton and Malhotra point, this "great escape" coincides with a pulse of intense inner-planet bombardment that left the Moon with the vast majority of the craters seen today.

After reading this report, it reminds me that computer models seeking to describe unobserved past history are based upon many assumptions, in this example the starting amount of mass in the ecliptic 4.5 billion years ago or so that is used in the program. When I review my database on 235 exoplanets, the average mass is 2.85 Jupiters yet our current ecliptic from Mercury out to Pluto totals a little more than 1.4 Jupiters. There are many assumptions involved in such modeling so perhaps other configurations are possible too for origins science.

Keep in mind that using current technology we more easily detect systems with large exoplanets in *eccentric orbits near the host star*. I do not think it is a good idea to use biased exoplanet data when generating theories for the known solar system with large bodies, small bodies, and many resonance regions.
-- Kevin Heider

I've done some computer modeling of the Solar system on my home computer in a very similar project. I read an article stating that the Kuiper belts of other stars are sometimes flat discs and sometimes have a large percentage of strongly inclined orbits. Our own Solar system fits in the latter catagory. This led me to wonder if maybe the hyposthesised "Nemesis: Death Star" might have been a smaller object perturbing the nearer Kuiper belt rather than a larger object perturbing the outer Oort Cloud. So I modeled it using Tony Dunn's GravitySimulator. I had to make assumptions in order to figure out anything. Any GravitySimulation takes a long time so you have to make assumptions to get in the ballpark. I thought a Jupiter mass object could damage the Kuier belt but surprise! it must be at least 3J. Without assumptions I would know nothing at all.

Michael, I agree that assumptions can be useful in computer models, however my concern is that many assumptions are used for origins science involving past, unobserved events. A good example is the 4.5 billion years used in the computer simulation let alone the assumed, starting mass in the ecliptic. In 4.5 billion years, Jupiter completes >= 379E+6 revolutions around the Sun. The asteroids in the main belt have mean orbital period near 4.4 years so some or many could complete >= 1E+9 revolutions around the Sun.

These are critical assumptions in the computer modeling, they are not facts.

This does not make sense:
"Every time Jupiter heaves a small body out to the Kuiper Belt or beyond, the planet itself shifts infinitesimally closer to the Sun. Do this to a trillion times, and the laws of physics say that Jupiter simply must move elsewhere."

"Moreover, the main belt's inner edge, roughly 2.1 a.u. from the Sun, marks the final location of a powerful resonance called Î½6 that's associated with the precession of Saturn's orbit. Highly sensitive to the ringed planet's orbital location, the Î½6 resonance swept through the entire belt like a snowplow, scattering untold millions of objects."

So scattering asteroids moves Jupiter in...but it moves Saturn out? "They assumed that...Saturn[moved]... outward by an estimated 0.8 a.u...."
Anyone else as confused as I am on this point?

Hmmm? Perhaps it could be because if Jupiter flung its influenced orbital debris outward towards the Ort Cloud therefore shifting its own orbit slightly inward (action/reaction?) and then assuming (dangerous) that Saturn flung its own influenced orbital debris inward, thereby causing the massive âLate Period Bombardmentâ of the inner solar system, would that not imply that Saturn would be orbitaly shifted outward slightly (opposite of Jupiterâs shift?) Just thinking out loudâ¦â¦