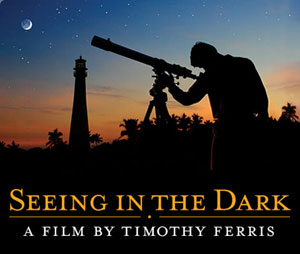 If you missed the film when it was on PBS last September, or if you just want to watch it again (perhaps you've since gotten yourself an HDTV), Timothy Ferris's Seeing in the Dark returns to public television next week.

You'll need to check your local station for broadcast time(s). I discovered that despite being told months ago that it would air on Wednesday, June 11th, as of today, Boston's WGBH doesn't have it on its schedule for that day. It is, however, showing days later on another PBS channel. I also checked the PBS station in Washington, DC, and it does have it on the schedule for 8 p.m. on Wednesday.

Students and teachers can still request use of the Internet-accessible telescope built for the show. See the program's website for more details.

And speaking of TV, another program to be aware of is When We Left Earth on the Discovery Channel. That six-episode series will air on the next three Sundays (two episodes per evening). Have your DVRs ready!