We're seeing a lot of red in the Boston area this week. I watched a little more red stuff last night on the Science Channel. A new series called Mars Rising premiered and it was very good. Airing of the show snuck up on me so I didn't get a chance to give warning. It repeats on the Science Channel, so set your DVRs. 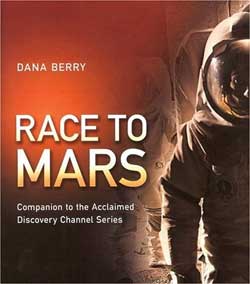 Canadians can read this book and watch the show. US viewers will have to wait a while for the mini-series. In the meantime, you can enjoy a related series on the Science Channel.

The six-part series is about sending humans to Mars. I thought this first program dealt well in highlighting many of the problems that such a mission could face — cosmic, mechanical, physiological, and psychological. Despite the fact that I have trouble riding theme-park thrill rides now, I don't know if I'd be up for a 3-year journey to Mars and back. Are you? It doesn't take much for something to go very wrong in space.

Mars Rising is just part of an interesting multimedia project out of Canada. Not only is there this science series, but there's also a docu-drama mini-series called Race to Mars. That's going to air in Canada early next week, but I have yet to find out when it will air in the US. Furthermore, there's a companion book to the drama by Dana Berry.

Race to Mars takes the angle of a the first crewed mission to Mars aboard a craft called Terra Nova. Some of the scenes are used in Mars Rising. Those and animations showing NASA's proposed Ares launch vehicles were fun to watch. Too bad I don't have the Science Channel in HD.

Curiously, the Science Channel has next to nothing about Mars Rising on its website. So check out the website at Canada's Discovery Channel. There's also a site associated with Race to Mars that has additional fun and games.

There's a lot more content about the series at this site: http://www.marsrising.ca and you should check out the games and simulations for the related show airing later: Race to Mars http://www.racetomars.ca