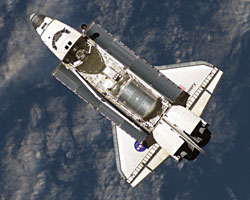 The cost of returning the Space Shuttle to flight after the Columbia disaster has caused NASA to curtail several key astronomy missions. An emergency spending bill now before Congress could save these and other science projects.

Two powerful US senators are spearheading an effort to add $1 billion in emergency funding to NASA's budget this year and next. The money would reimburse the agency for most of the $2.3 billion cost of recovering from the Space Shuttle Columbia accident and the damage caused to some of its Gulf Coast facilities by Hurricane Katrina. More important for astronomy enthusiasts, it would enable NASA to restore funding for a host of space-science missions now on the chopping block.

As detailed in the June 2006 issue of Sky & Telescope, many NASA astronomy projects — including some already well under way — are facing lengthy delays or outright cancellation due to NASA's desperate financial straits. Among the threatened missions are the Stratospheric Observatory for Infrared Astronomy, SIM PlanetQuest, and Constellation-X high-energy telescopes. After the Challenger disaster in 1986, Congress provided an extra $2.7 billion to pay for a replacement shuttle, but no such augmentation has been forthcoming since Columbia burned up on reentry in February 2003 and NASA's Stennis Space Center in Mississippi and Michoud Assembly Facility in Louisiana were ravaged during the severe 2005 hurricane season.

Alarmed by the resulting deep cuts to NASA's science and aeronautics programs, Sen. Barbara Mikulski (D-Maryland) and Sen. Kay Bailey Hutchinson (R-Texas) proposed boosting NASA's budget at a meeting of the Senate Appropriations Committee on July 13th. Both senators come from states with a major NASA presence; Maryland hosts the Goddard Space Flight Center and Space Telescope Science Institute, and Texas is home to the Johnson Space Center. With relatively little debate, the appropriations committee approved the emergency-funding measure and passed it along to the full Senate, where a vote on the bill has not yet been scheduled. Even if the Senate votes to give NASA the extra money, the bailout will still need approval by the House of Representatives and President Bush.

The American Astronomical Society (AAS) is urging its members to contact their representatives in Congress and encourage them to support the NASA spending bill. If you want to weigh in with your own opinion but are not sure how to contact your congressional representatives, visit the AAS public-policy Web page.