Using a double dose of new technology, astronomers have given an old telescope the sharpest vision ever achieved — besting even that of the Hubble Space Telescope.

The resolving power of the 200-inch (5-meter) George Ellery Hale Telescope, which went into service on Palomar Mountain in Southern California in 1948, is usually limited by air turbulence, which smears pinpoint stars into round smudges. Were it not for the atmosphere, the giant reflector would discern celestial details as small as 0.02 arcsecond in visible light. Instead, even on nights when the air is relatively still, the telescope's resolution is at best some 25 times worse, or about ½ arcsecond. (In case you're unfamiliar with these units, 1° contains 60 arcminutes, or 60', and each arcminute contains 60 arcseconds, or 60".) 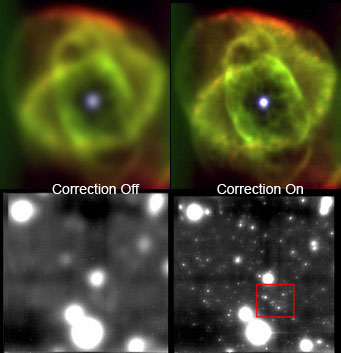 These LuckyCam images of the Cat's Eye Nebula (top) and the core of globular cluster M13 (bottom) demonstrate the power of adaptive optics on a large telescope, in this case the Hale 200-inch (5-meter) reflector atop Palomar Mountain. The Cat's Eye and M13 images are 20 and 10 arcseconds wide, respectively.

As has been done at most other professional observatories, astronomers at Palomar have retrofitted their big scopes with adaptive optics (AO). Using powerful computers and rapidly deformable mirrors, this technology compensates for atmospheric motions to sharpen the view during long-exposure imaging or spectroscopy. Equipped with AO, the world's largest ground-based telescopes now routinely resolve features as small as a tenth of an arcsecond.

Now Nicholas Law (Caltech), Craig Mackay (University of Cambridge), and their colleagues have taken AO a step further with the new Lucky Camera, or Lucky Cam. Like the webcams used by backyard astrophotographers, this device shoots many frames per second. Inevitably, some of them are snapped at moments of exceptional atmospheric stability. At these "lucky" times, the images are especially good. Combining AO with "lucky imaging," the Palomar team has in some cases achieved an angular resolution near the 200-inch telescope's theoretical limit. That's about twice as sharp as the best images from Hubble, because the Hale telescope has a mirror twice as big across, and resolving power scales directly with aperture diameter once you remove the atmosphere from the equation.

Many AO systems work well only with very red or near-infrared light, which is less affected by atmospheric blurring than visible light at bluer (shorter) wavelengths. Lucky Cam, however, works its magic quite nicely across the entire visible spectrum, according to press releases from Caltech and the University of Cambridge.

When told of such advances, nonastronomers often ask whether AO on large ground-based reflectors makes Hubble and other space telescopes obsolete. The answer is no, for several reasons. First, most AO systems sharpen the view over a very narrow field. Lucky Cam, for example, produces crisp images just 10" to 20

e, whereas Hubble's cameras are super sharp across a 2½' (150") field. Second, space telescopes can study the heavens across the entire electromagnetic spectrum, most of which is blocked by Earth's atmosphere. And third, the background sky is darker in space than on the ground, because air absorbs solar energy during the day and then releases it at night, producing a faint — but nevertheless discernible — airglow that washes out faint, low-contrast astronomical objects.

There's a new technology in the works called multiconjugate adaptive optics that will eventually enable ground-based telescopes to produce sharp images over wider fields. That might make visible-light space telescopes obsolete, but even if it does we'll still need space telescopes to explore the heavens at infrared, ultraviolet, X-ray, and gamma-ray wavelengths.

Thank you for describing the relative strengths of adaptive optics (AO) and the Hubble Space Telescope. Too often press releases favorably compare AO results to Hubble and people are left with the impression that Hubble is obsolete because of AO. Thanks for doing this right.

As Josh said, excellent piece. It occurs to me, too, that a space-based (or moon-based) scope has the luxury of indefinite (or nearly so) exposures at a given point in the sky. Anything Earth-based is inevitably interrupted. An equivalent to the deep-sky widefield image from the Hubble would take months of dedicated time from any Earth-based telescope. In short, a space-based scope really condenses the time element of faint-object observation.