Sky & Telescope's December 2011 issue is now available to digital subscribers. Some print subscribers have already received it, and it's officially on-sale at newsstands starting November 1st. 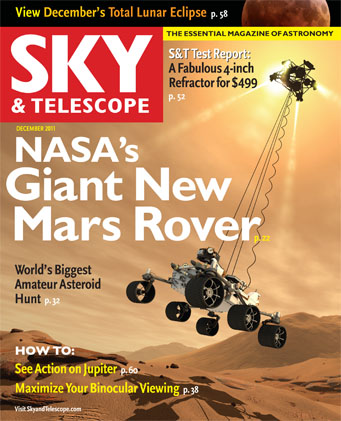 The issue's cover story describes the giant rover Curiosity which, if all goes well, will launch to Mars in late November or early to mid-December. Curiosity is a mobile robotic geological and meteorological laboratory, of a size and sophistication far beyond anything that's ever been sent to another planet before. For the first time, we will be able to analyze Martian rocks in detail, determining what precisely minerals they're made of, doing the kinds of tests that geologists would love to perform if Mars samples could be brought back to Earth.

I loved Gary Seronik's article on binocular observing. How can you tell what will look good through your binoculars? What makes one pair of binoculars better than another for observing deep-sky objects? Gary has unique and valuable insights on these questions. 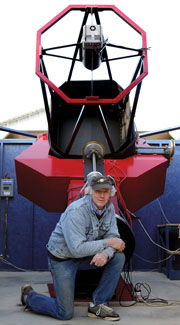 To my mind, the most exciting story in this issue is the one about the incredible asteroid observer Bob Holmes. Having decided to devote himself to tracking and refining the orbits of Near-Earth Objects (NEOs), this amateur astronomer set about the project with a will, building a gigantic 32-inch robotic telescope entirely dedicated to that task. He was so productive that in 2007 he received a grant that allowed him to devote himself to the job full-time. And in the summer of 2011 this one individual — using telescopes that he built himself — produced almost twice as many NEO observations as everyone else in the U.S. combined, including professional observatories. Hard to believe, but true!

I also love Debra Ceravolo's article on producing true-color images using narrowband data. Sound too technical for you? Possibly so if you're not an astro-imager. But I've always been fascinated by the physiology of color vision, so this was right up my alley.

There are also the usual great product reviews and great observing articles, including a particularly interesting column by Charles A. Wood about the newly discovered (or strongly suspected) shield volcanos on the Moon.

That's just a taste of the riches in the December 2011 issue. To find out more, read our online Table of Contents.