Sky & Telescope's January 2012 issue is now available to digital subscribers. Some print subscribers have already received it, and it's officially on-sale at newsstands starting December 6th. 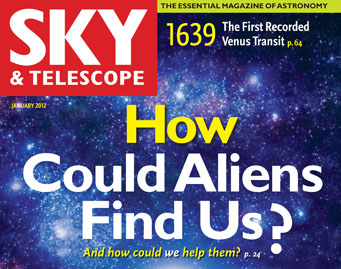 This issue's cover story deals with a question central to the search for extraterrestrial life: if an advanced civilization found signs of life, could it tell what kind of life it was? Besides bread crumbs such as the Voyager spacecraft, humans don't leave striking cosmic signs of our presence. Radio astronomer Joseph Lazio describes various ways — several of which are pretty bizarre — we could signal our presence to aliens outside the solar system. Nuclear explosion on the Moon, anyone? 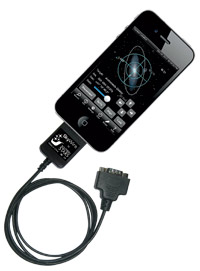 When it comes to technology, I've been dodging peer pressure for years: I refuse to buy an iPhone. But this year's roundup of Hot New Products by S&T's editors may have finally convinced me. There's a planetarium app that, with the right cable, will let you use your iPhone to control a Go To telescope. Now that's a reason for a techie phone.

The two brightest planets, Venus and Jupiter, share the twilight sky this month. Venus starts reasonably high on New Year's Day and will climb even higher up the sky's dome over the course of January, reaching more than 25° above the horizon at the end of January (for skywatchers at latitude 40° north). It's a perfect opportunity to guide nascent observers in distinguishing between the two "bright stars."

Catching asteroids occulting stars, finding gems in Orion, and spotting the first member of the Messier Catalog with binoculars — that's just a taste of what you can do with the January 2012 issue in hand. To find out more, read our online Table of Contents.

I received my email notification for the January issue, however, the link took me to a blank page. Now it says that I have exceeded the number of computers that I can read the issue on, but I haven't seen anything! Please let me know how the receive my January digital issue.

The link to
Click here to find out more about digital subscriptions.
is broken.