Sky & Telescope's July 2012 issue is now available to digital subscribers. Some print subscribers have already received it, and it's officially on-sale at newsstands starting June 5th. 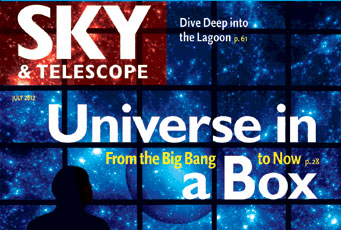 Putting the vastness of the universe in a box seems like a preposterous notion — until you see the results. Cosmologists working with the Bolshoi computer simulation (bolshoi means "big" in Russian, with the connotation of "great" or "grand") have produced beautiful images and videos of the "cosmic web" of dark matter that gives structure to our universe. The new simulations are coming eerily close to matching observations. In fact, the resolution of the Bolshoi simulations is so high, cosmologists can now trace the evolution of individual galaxies, which helps us to understand things like how the Milky Way managed to attract not just one, but two large satellite galaxies (the Small and Large Magellanic Clouds).

July's issue also brings you the newest results about brown dwarfs, those weird half-star, half-planet objects that astronomers find floating throughout the Milky Way. New infrared searches of the sky are finding the coldest brown dwarfs seen to date, some only as warm as a summer's day. And that's only the beginning $mdash; the search for cooler brown dwarfs continues and brown dwarfs are now promising to teach astronomers about everything from star formation to exoplanet atmospheres to the nature of the first stars to form in the early universe.

Aside from the exciting science news in this issue, I'm also proud of this issue because it's my very first as an S&T editor. It's amazing what you can learn when you edit an article, and in this issue, I was really excited to do the honors for Dean Regas's article about extreme eclipse chasers. I'm still waiting for my chance to observe a total solar eclipse, but for now I'll settle for reading the fascinating stories from those who have traveled to the most exotic and isolated locations on Earth, from the Gobi Desert to icy Antarctica, to see totality.

In the observing section of the July issue, we leave behind the eclipse and transit events of May and June, and we enter the realm of summer observing. Fred Schaaf guides us through the "abundance of riches" in the summer sky, including Venus-Jupiter and Mars-Saturn planet pairings, and Alan Whitman takes us on a tour of the famous Lagoon Nebula. Plus, Sue French takes us to the Cat's Eye Nebula and the many other treasures that can be found in the constellation Draco.

Way to go, S&T and congratulations Dr. Young. We look forward to reading more of your work both here and in the mag.

When I click on the PDF button at the top I get a "404 - Not Found" error. Either you have an incorrect link or the file is not on your server. I was trying to access this on an iPad.