Sky & Telescope's June 2011 issue is now available to digital subscribers. It has already started to ship to print subscribers, and is officially on-sale at newsstands starting May 3rd. 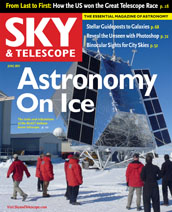 Click above the watch clips from the movie about the Balloon-borne Large Aperture Submillimeter Telescope and its launch from Antarctica.

Our cover story is about BLAST, the Balloon-Borne Large Aperture Submillimeter Telescope. It's designed to look for Ultraluminous Infrared Galaxies, which hosted huge bursts of star formation in the distant past, when light that we now see them by started its trip to Earth. Unfortunately, these galaxies are detectable only in submillimeter wavelengths, which are absorbed by water vapor in Earth's atmosphere and obscured by the atmosphere's own heat. There are only two ways to overcome that handicap: fly the telescope in space, which is extremely expensive, or float it under a high-altitude balloon above Antarctica, the coldest, driest place on Earth.

As luck would have it, Paul Devlin, brother of coauthor Mark Devlin, is an award-winning professional filmmaker. Click here to see clips from his remarkable movie about the science and adventure behind BLAST. 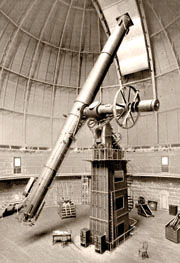 On a completely different front, noted historian and science journalist Trudy Bell tells how and why the United States changed from being a scientific backwater in the 1820s, with not a single observatory, to being the world's astronomical superpower in 1900, far ahead of any other country in the quantity, quality, and size of its telescopes.

Speaking of telescopes, I was fascinated to read about the AAVSO's plan to use four modest 8-inch astrographs to fill a glaring gap in our star catalogs. Although modern databases are extraordinarily deep, comprehensive, and accurate, the magnitudes of the stars in them are notoriously unreliable. Star brightness is the stock in trade of the AAVSO (American Association of Variable Star Observers), so they are aiming to plug this gap once and for all. When their new survey is complete, we should have accurate stellar magnitudes in multiple passbands for all stars brighter than magnitude 16. Currently, the limit is closer to 11.5 -- a pretty huge difference!

As usual, the June issue is stuffed full of observing guides, from Sue French's Deep-Sky Wonders in Serpens to Hugh Bartlett's Binocular Sights to Kent Blackwell's story on galaxies near bright stars.

On the equipment front, there's a review of Orion's new flagship CCD camera and Tele Vue's new line of Delos eyepieces. Buy our June issue and read all about it!

Click here to see more about the June issue.