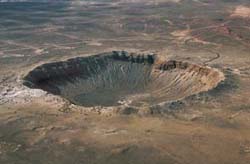 Meteor Crater, near Flagstaff, Arizona, was excavated about 50,000 years ago when an iron mass 40 to 50 meters across struck flat-lying sedimentary rocks with 15 to 20 megatons of kinetic energy. The resulting bowl-shaped crater is 1.2 km in diameter and 200 m deep.

Every time a rocky body whizzes past Earth, asteroid specialists brace themselves for a frenzied burst of "what-if" doomsday questions from the news media. But while the risk of the interloper striking our planet is usually vanishingly small, the longer-term prospects for all such near-Earth asteroids are poorly known. Current thinking holds that objects 50 to 75 meters across, comparable to the one whose airburst devastated the Tunguska region of Siberia in 1908, probably come crashing down every 1,000 years on average. Most researchers think that objects twice that size, even though they arrive less often, probably strike the ground intact — wreaking havoc locally if one should hit land and triggering an ocean-spanning tsunami if it makes a splash.

But Philip A. Bland (Imperial College London) and Natalya A. Artemieva (Institute for Dynamics of Geospheres, Moscow) argue that the threat from small asteroids has been greatly exaggerated. Writing in July 17th's Nature, they conclude that stony asteroids up to several hundred meters across rarely make it to the ground but instead almost always break up high in the atmosphere.

Their finding is based more than 1,000 computer-simulated collisions with bodies up to 1 kilometer in diameter. In the past, most theorists have treated cosmic projectiles as giant blobs of liquid racing downward through Earth's atmosphere. But Bland and Artemieva believe that even sizable stony objects should break into successively smaller pieces while still very high up. This fragmentation model, first introduced in 1980 and refined recently by Artemieva and others, implies that a stony impactor will be reduced to rubble long before it reaches ground level.

"Our simulations predict atmospheric fragmentation for much larger objects than previously thought," the two researchers conclude. They predict that a 220-meter-wide asteroid, the size considered most likely to create a tsunami at least 5 meters high when it strikes the open ocean, actually makes it all the way to the ground only once in 170,000 years on average — an interval 50 times longer than previously estimated. A body 3 to 5 meters across, big enough to create a 100-meter crater, should strike Earth every 200 to 400 years.

Artemieva points out that their "separated fragment" model doesn't apply to comets or loosely bound piles of rocky material, which behave more like fluids as they disintegrate in the atmosphere. But it's a particularly good fit to iron meteoroids, which will remain intact longer but should still break apart if no more than about 50 meters across. "I think the most interesting advantage of this model is the possibility to predict strewnfields," she says, which are clusters of meteorites dropped during a single event like the 1947 Sikhote-Alin fall in eastern Siberia.

Dynamicist Erik Asphaug (University of California at Santa Cruz) comments that if Bland and Artemieva are right, "certainly the tsunami hazard becomes trivial in comparison with other natural catastrophes." But Clark R. Chapman (Southwest Research Institute) warns that we shouldn't lose sight of the potential damage from Tunguska-like airbursts. "Atmospheric breakup and explosion in the lower atmosphere may be even more damaging than if the object hit the ground intact," he points out.

If the threat from small asteroids were truly reduced so dramatically, astronomers might rethink their plans to build telescopes capable of detecting hundreds of thousands of Earth-threatening asteroids in the 100- to 500-meter size range. One such effort, dubbed the Panoramic Survey Telescope and Rapid Response System (Pan-STARRS), got the U.S. Air Force's go-ahead for development last October. "A 200-meter body carries roughly 1,000 megatons of kinetic energy," observes David C. Jewitt (University of Hawaii), a Pan-STARRS participant. "Personally, I want to know as much as possible about any 1,000-megaton explosion on Earth — no matter where it might occur!"