Attendees of the 29th annual Symposium on Telescope Science gather for a group picture.

Many Sky & Telescope reports in recent years have shown that amateur astronomers are able to conduct a wide range of research projects. On May 11th to 13th, more than 100 amateur and professional astronomers gathered in Big Bear, California, to share recent research results, methods, and instrumentation related to small-telescope astronomical science at the annual Symposium on Telescope Science hosted by the Society for Astronomical Sciences (SAS).

This year's symposium was a joint gathering of the SAS and the Center for Backyard Astrophysics (CBA). During two full days of technical presentations, amateur astronomers described using CCD imagers for photometry of asteroids and variable stars, video cameras for asteroid occultations, Jovian satellite mutual events, meteor studies, spectroscopy to monitor both eclipsing and pulsating variable stars, and polarimetry to examine the scattering properties of stellar targets. 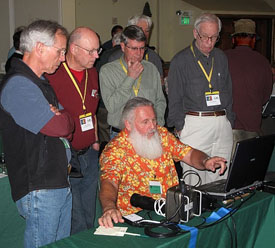 Because one of the goals of the SAS Symposium is to equip amateur astronomers to conduct such research activities, the agenda included two tutorial workshops. Olivier Thizy discussed equipment needs, observations, and data-reduction procedures for small-telescope spectroscopy, and he described some projects where amateur observers are making important contributions, particularly the spectroscopic monitoring of Be stars. Richard Berry and Jerry Foote's presentation, "Calibrating CCD Imagers," demonstrated the methods for characterizing your CCD and provided advice for achieving the best possible photometric results.

Attendees were treated to new-product highlights from several sponsoring companies, which led to quite a few impromptu networking discussions surrounding the conference location. The event was rounded out by the traditional banquet and a wonderfully entertaining presentation by Chris Butler on "Our Little Corner of the Galaxy".

Epsilon Aurigae received a lot of attention this year, particularly observations from the start of its current eclipse. Bob Stencel (Denver University) described how modulation of a potassium emission may be hinting at the presence of rings in the occulting object, and Jeff Hopkins (Hopkins Phoenix Observatory) showed the photometric evolution of the entry into eclipse, providing detail that isn't available for previous eclipses. The next effect to watch for is the mid-eclipse brightening, which might begin any time now and continue through late 2010.

Joe Patterson (Columbia University) provided an excellent and entertaining introduction to the physics and observation of cataclysmic variable stars. Small-telescope photometry by amateur observers — who can collaborate to provide 24-hour coverage of a target star — is critical to characterizing the behavior of these stars.

Alan Harris (Space Science Institute) discussed the "Divine Dipsomania" of asteroid studies: once you begin, it's difficult to quit! He offered several topics (and challenges) for small-telescope research, such as characterization of recently separated asteroid pairs.

Arne Henden (AAVSO) provided some "extreme photometry" challenges for the group. Every nova is different, and each one needs continued observations through at least one year after its outburst. Will more amateurs step up to this need and fill in the too-sparse data sets for many novae? One of the Cepheids being watched in the Andromeda Galaxy (M31) is "only" magnitude 19.4. Can any backyard scientists reproduce Hubble's groundbreaking observation of its light curve? HM Cancri is the fastest-known eclipsing binary, with a period of only 5.4 minutes. At magnitude 21, can any amateur reproduce its eclipse light curve and determine reliable times of minimum?

The 2010 Symposium provided a window into small-telescope science and some of the opportunities for collaboration between amateur and professional astronomers. (Videos of many presentations are available here.) This was the 29th such gathering, and the progress on display bodes well for the future of small-telescope astronomical science!

Well known for his efforts to bring amateur and professional observers together, Bob Buchheim is the author of
The Sky is Your Laboratory: Advanced Astronomy Projects for Amateurs. He's the 2010 winner of the Western Amateur Astronomers's G. Bluce Blair Award for service to amateur astronomy.