Lakes on Saturn’s moon Titan don’t do the wave very well. Radar images from NASA’s Cassini spacecraft show glassy smooth surfaces, even on bodies like Ligeia Mare, a large sea roughly 400 kilometers (250 miles) wide. There are patterns on the shoreline of the southern hemisphere's Ontario Lacus that might be from waves, but the features aren’t definitive. Winds haven’t been too high on Titan since Cassini first arrived in Saturn's system in 2004, so the lack of waves is odd but understandable. 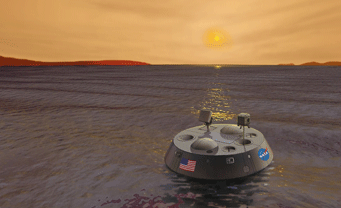 Artist's impression of the Titan Mare Explorer (TiME) capsule floating on one of Titan's liquid hydrocarbon lakes. TiME would perform the first direct inspection of an ocean environment beyond Earth.

The ESA’s Huygens probe sent back amazing surface images, including snapshots of delta-looking features, when it made its dent in the moon’s equatorial region in January 2005. But it’s hard to study a lake when you land in a sand dune. Scientists hope to send another mission, called the Titan Mare Explorer (TiME), to make its splat in Ligeia Mare in 2023 — if NASA chooses it from one of three potential Discovery missions up for selection this year.

An upcoming Icarus paper by TiME researchers Ralph Lorenz (Johns Hopkins University Applied Physics Laboratory) and Alexander Hayes (University of California, Berkeley) confirms that the capsule shouldn’t face fearsome seas if it survives the funding and launch gauntlet. The duo calculated how various parameters — air density and liquid’s resistance to flow, among others — affect wave growth, given the moon’s weak surface winds. They found that waves on Ligeia Mare won’t normally exceed 0.2 meters (not even a foot high), and occasionally might reach just over a half meter in the course of a few months.

“You’d notice 0.2-meter waves if you were in a rowboat, but they wouldn’t get surfers excited,” Lorenz says.

Ontario Lacus and another ethane-rich body, Kraken Mare, should have similar wave heights. But winds may pick up in the northern hemisphere as summer begins there later this decade and solar heating stirs up the air. Cassini has observation plans laid out through 2017, the year of Titan’s northern summer solstice, so the spacecraft may catch some waves, after all.

TiME would land in late Titan summer, possibly missing these waves. “There would still be maybe enough wind to cause the capsule to drift some,” says TiME principal investigator Ellen Stofan. But for now her team expects placid sailing. “The news is all good.”

The two other Discovery missions in competition with TiME are the Comet Hopper, which would land on a comet multiple times, and the Mars-interior-studying InSight mission (Interior Exploration using Seismic Investigations, Geodesy and Heat Transport), formerly known as the Geophysical Monitoring Station (GEMS). The final selected mission will have a max budget of $425 million, not including the launch vehicle.