An inventive approach suggests that the solar neighborhood is a mix of nursery and nursing home. 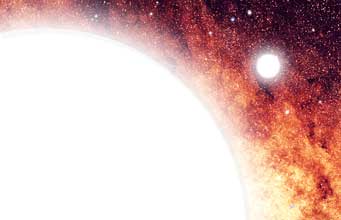 Artist's conception of a binary pair of white dwarfs. An analysis of several thousand white dwarfs suggests that star formation peaked twice in the solar neighborhood.

Just how old are the stars near the Sun? When did our nearest few thousand neighbors start their lives as stars? These are some very basic questions that are difficult to answer because of one simple fact: it’s really, really hard to estimate the age of any given star in the Milky Way. But knowing the rate at which stars form over time, also known as the “star formation history,” is vitally important for many astronomical investigations, from understanding the formation of our galaxy to estimating the number of exoplanets that are nearby.

Recently, Nicholas Rowell (Dundee University, UK) has developed a new tool for estimating the star formation history of the solar neighborhood — and he’s come up with an intriguing answer.

Appearing in an upcoming Monthly Notices of the Royal Astronomical Society, Rowell's work takes advantage of a class of stars known as white dwarfs. These stars are the final remnants of stars like our own Sun. Once a star has finished fusing the hydrogen and helium in its core, it sloughs off its outer layers, leaving the glowing core behind. These cores often have masses about 60% that of the Sun but vary greatly in temperature, ranging from about half to 5 times that of the Sun.

Rowell took advantage of this property to infer the underlying rate at which the nearest white-dwarf-birthing stars formed. The method works in this way. First, identify the coolest white dwarfs seen near the Sun. Those stars were the first to become white dwarfs because they have had the longest time to cool, so they set the limit on how far back in time you can look. (In this study, Rowell was limited to about 10 billion years ago.) Next, Rowell examined the number of white dwarfs in the second-coolest bin. These stars haven't had quite enough time to cool off, so they set constraints on the star formation history at a more recent time, say 8 billion years ago. He repeated this process over and over, until he reached the hottest white dwarfs, which have formed within the last billion years.

Rowell tested his method using a variety of mock stellar populations. He generated a synthetic solar neighborhood, where he could tweak the rate of star formation with time, as well as the intrinsic stellar properties of the stars that formed white dwarfs, such as their compositions and masses. He then "observed" these fake stars, and used the method described above to infer the rate of star formation. He found that the model performed quite well at recovering the star formation history, although it depended on the exact type of cooling track models that were used.

Finally, Rowell used his method on two samples of nearby white dwarfs, coming from the Sloan Digital Sky Survey and the SuperCOSMOS Sky Survey. Each sample contained several thousand white dwarfs. Using his new technique, Rowell inferred that star formation within 650 light-years of the Sun has been ongoing for the last 10 billion years or so, with two major peaks. The first happened 7 to 9 billion years ago, and the other was just 2 to 3 billion years ago.

Previous studies using normal, hydrogen-fusing stars have found the more recent star-formation bump, but they’ve disagreed on stars’ earlier history. If the white-dwarf method holds up to scrutiny, it could be a new way to place strong constraints on a property of our galaxy that has been largely unknown. With larger samples of white dwarfs on the way (from surveys like LSST), this technique could be a powerful tool for studying our galaxy’s history.

Reference: N. Rowell. "The Star Formation History of the Solar Neighbourhood from the White Dwarf Luminosity Function." Accepted to the Monthly Notices of the Royal Astronomical Society.

In 10 billion years, the Sun may have completed 40 or more revolutions in the Milky Way. Does this model take that into account? It would seem different stars would appear in the 650 LY area during all that time and thus the present population observed may not reflect star birth history in the Sun's area.

Need to make a quick correction here. The Milky Way could rotate 40x or more in 10 billion years, the Sun in 5 billion years is about 20. Same issue remains though concerning stars within 650 LY radius of the Sun and measuring star birth rate and history within that area.

Yes Rod, it is said that the Sun and its system must have drifted far from the place of its origin. The hundreds of other stars being ‘aged’ in this report must have drifted in from many diverse areas also if the inferred ages are correct. Therefore these samplings of stars in our vicinity could be dating, not just the history of star formation it this vicinity but the history of stellar formation in the overall disk population of our galaxy.

Bruce, good observations in your post. I see two critical assumptions made in this White Dwarf dating method. The rotation history of the Milky Way and Sun are very different (40 vs. 20 revolutions) and white dwarfs all form near the same initial temperature and cool at similar rates leaving behind different white dwarf populations interpreted as different star formation histories on the H-R diagram. A third assumption seems to be that within 650 LY distant from the Sun, we have many stars that have drifted into this area after numerous revolutions in the Milky Way spiral arms thus likely a mixed star formation history is what we may be viewing. Assumptions are okay but testing to confirm appears elusive 🙂

This seems to be very elegant work, using both sophisticated modeling and observations of real white dwarves. (I am somewhat skeptical of astronomical studies that are carried out completely within computer models.) As to the question of how well our stellar neighborhood represents the larger galaxy, I imagine we'll have to leave that question open for the time being. I hope that Rowell's finding that there were two distinct peaks of star formation over the past 10 billion years will inspire other researchers to look for confirmatory evidence through other means.