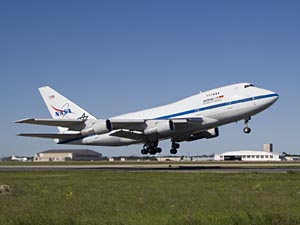 The Stratospheric Observatory for Infrared Astronomy (SOFIA) takes off for its first test flight on April 26, 2007, in Waco, Texas.

On April 26, 2007, with its four jet engines screaming, a giant Boeing 747SP aircraft rolled down a runway and took to the air. Happens every day, right? Not exactly. This particular 747 spent the last eight years in a hangar at L-3 Communications in Waco, Texas, being converted from an airliner to an airborne observatory. And having successfully completed its first post-modification test flight, the Stratospheric Observatory for Infrared Astronomy (SOFIA) is now a major step closer to helping unravel the mysteries of the cosmos.

A joint project of NASA and DLR, the German space agency, SOFIA carries a 2.5-meter (98-inch) telescope that will look out a large hole in its side, behind the port (left) wing. Flying above 99% of the infrared-absorbing water vapor in Earth's atmosphere, it will complement the Spitzer Space Telescope and other ground- and space-based infrared observatories.

The most radical modification to the aircraft is the telescope bay and aperture door, which occupies much of the fuselage between the wings and tail. SOFIA also features new high-power engines, state-of-the-art avionics, and a control room where high-flying astronomers will operate the telescope and scientific instruments and where teachers will help prepare the next generation of researchers. 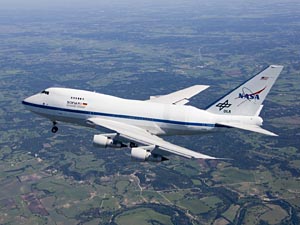 SOFIA soars over central Texas during its first post-modification shakedown cruise. Visible just ahead of the tail is the door covering the telescope cavity, which remained closed.

Former Space Shuttle astronaut C. Gordon Fullerton was at the controls for SOFIA's maiden voyage. No stranger to infrared astronomy, Fullerton commanded the Spacelab 2 mission in July–August 1985, during which his crew operated an infrared telescope and several other instruments mounted on a platform in the orbiter Challenger's cargo bay.

Last week's flight was conducted at low speeds, with the landing gear down and the aperture door closed. It's the first of several shakedowns designed to prove the refurbished aircraft's airworthiness. Once that's done, SOFIA will be flown to NASA's Dryden Flight Research Center in California. The real nail-biter will occur high over the Mojave Desert about a year from now, when the 16-foot-tall aperture door is rolled back and the 22½-ton telescope is exposed to the sky for the first time. Aircraft designers have "pushed the envelope" of aerodynamics to ensure that airflow inside the telescope bay will not be turbulent and that the pilots will have no problems handling the plane with the aperture door open. Once a year-long series of open-door flight tests shows they've succeeded, they'll turn SOFIA over to the astronomers.