SOHOâ€™s latest batch of comet finds include No. 1,213, shown here in this false-color view as a tiny, bright spot with a long, narrow tail lower right of the Sun and heading toward perihelion. The bright objects to the upper left and to the right of the Sun are Venus and Mars, respectively. American amateur astronomer John Sachs discovered the comet on November 1st in LASCO C2 and C3 images. Click on the image for a larger version.

On October 10th, less than eight months after the 1,100th comet was found in images obtained by the SOHO (Solar and Heliospheric Observatory) spacecraft, SOHO No. 1,200 was discovered by a Chinese amateur astronomer.

Bo Zhou, a 30-year-old factory worker from Xingping City in Shaanxi province in northwestern China, detected the tiny, diffuse, and very faint object in images taken with the spacecraft's LASCO C2 coronagraph, which he downloaded into his computer. The new interloper turned out to be a member of the Kreutz family of "sungrazing" comets, which usually get vaporized during their close encounters with the Sun. To date, Zhou has discovered 30 SOHO comets. He found his first one — No. 795 — in 2004. 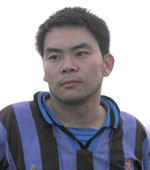 In addition to searching for comets in SOHO images, Bo Zhou scans the skies with his Chinese-made 60-millimeter refractor and 7x50 binoculars as well as a homemade 8-inch reflector.

Launched in 1995, SOHO is operated by NASA and the European Space Agency. Although its primary mission is to continuously monitor the Sun's activity, it has now become the most prolific comet "discoverer" in history. Zhou is one of a growing number of successful SOHO comet hunters worldwide who regularly scan LASCO images, which are posted in near-real time on the Internet. To join in the search, go to the SOHO Comets page.

As of November 2nd, SOHO's comet tally stands at 1,214. The latest find is a very faint one discovered by fellow Chinese amateur Hua Su in archived images from April 2003.