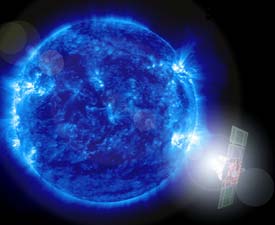 The Solar and Heliospheric Observatory (SOHO) launched in 1995 and has been monitoring the Sun ever since. Despite the recent antenna malfunction, the craft is healthy and transmitting observations to Earth 80 percent of the time.

In what looks to become a periodic annoyance, sometime today or tomorrow communication between Earth and the Solar and Heliospheric Observatory (SOHO) will be blacked out. The loss of transmission should last for the next two weeks.

Ever since its December 1995 launch, the observatory has been monitoring the Sun almost continuously. During that time it has provided scientists with round-the-clock coverage of solar activity, both internal and atmospheric. In the process, SOHO has become a pivotal tool in humanity's quest to understand space weather.

The sudden blackouts, engineers have surmised, stem from a faulty motor in the spacecraft's high-gain antenna. To relay its observations to Earth, SOHO has to point the antenna directly toward Earth. To get into position, the antenna has motors that move it vertically and horizontally. It is the horizontal motion motor that failed.

According to SOHO project scientist Bernard Fleck the blackouts will total some 18 days every three months, or about 20 percent of the time. And for Fleck, that's a situation he can live with.

"The spacecraft is safe, it's not in crisis," says Fleck. "We are in a situation where we can still achieve all of our scientific goals. We aren't thrilled [by the blackouts], but it's not the end of the world."

Among SOHO scientists, the task at hand is to determine exactly what went wrong with the motor and why. Many solutions are possible, ranging from new software packages that can better compress and store observations made during the blackout periods. Orbital tweaks that would minimize or remove the blackouts are also under consideration.

"We don't need a solution in the next few weeks," says Fleck. Rushing to fix the problem on the short term "could put us at risk in the years to come."

The seven-year-old spacecraft has survived worse crises. In 1998 an error by ground controllers led to a complete loss of communication with the Sun watcher. It took four months before scientific observations continued. Since the launch, the craft has more than doubled its planned three-year lifespan.