Solar Flares Aren't What They Seemed 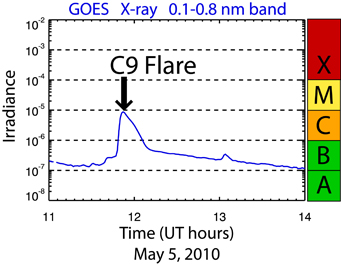 A common classification of flare magnitude is based on the peak intensity of the X-ray as measured for more than 30 years by the NOAA GOES satellites. The X-ray flare classification includes a letter, either A, B, C, M, or X, and a number from 1 to 9. The letter represents a factor of 10 change in the X-ray intensity; the number is the intensity within the flare class.

When British amateur astronomers Richard Carrington and Richard Hodgson independently saw a brightening of a small region of the Sun about 150 years ago, in 1859, they saw a very powerful event now called a solar flare. Since American astronomer George Ellery Hale discovered about 100 years ago that sunspots are regions of strong magnetism on the Sun, astronomers have linked magnetic storms on Earth to sunspots and to the solar-activity cycle. For roughly the last 50 years, solar flares have been categorized and detected by the x-rays they give off. The current classification of flares goes, in increasing power at their peak, A, B, C, M, X.

Last Wednesday, scientists reported that they haven't been noticing most of the solar flares' energy. In a NASA Press Conference, held simultaneously with the release of a paper online in The Astrophysical Journal, they reported on new results based on observations with NASA's Solar Dynamics Observatory. Since its launch on February 11, 2010, SDO has detected over a couple of hundred solar flares with its extreme-ultraviolet measuring instrument and with its cameras that take images also in that part of the spectrum beyond the violet, the ultraviolet. (Far into the ultraviolet is known as the extreme ultraviolet.) Several analyses have now shown that at least a group of the most powerful flares, which are detected in x-rays by satellites such as the GOES (Geostationary Operational Environmental Satellite) series of the National Oceanic and Atmospheric Administration, give off more energy about 90 minutes later than the x-ray peak than occurred in that first detected peak. This hitherto undetected second peak may not be quite as powerful at its maximum as the first peak but covers a somewhat longer time, rising to its peak and falling more slowly than the x-ray peak. It can thus contain more energy than the first peak. 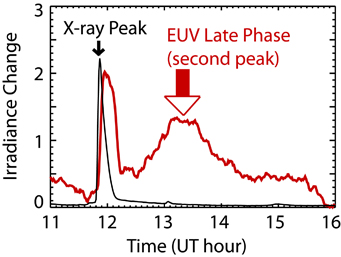 The SDO observations have revealed a set of flares that have a large second peak for some of the extreme ultraviolet (EUV) emissions. It had previously been known that the EUV emissions have a peak near the time of the flareâ€™s X-ray peak, but this second EUV peak is one to five hours later and without a corresponding X-ray peak. We refer to this delayed, second peak as the EUV Late Phase.

Because of all the previously undetected energy hitting the top of the Earth's atmosphere, and after the unexpected delay, theories of how the Earth's ionosphere, a high level of our atmosphere, is created have to be reconsidered. The ionosphere aids in long-distance radio transmission, and affects signals from the network of Global Positioning System (GPS) satellites. Mere distortions in the signals can affect the accuracy of the positions measured. Such inaccuracies may be OK if you are using GPS in your car, but more-and-more airplane routings are to be based on GPS. Accurate GPS signals are of growing importance, and the FAA, with its Wide Area Augmentation System, is looking into ways of protecting the GPS from solar flares and the resultant radio radiation. This radio radiation, when it comes at the same frequencies used by GPS, can overwhelm the receivers. No specific duration of outages was given at the press conference, though, in spite of a question asking for such an estimate.

The Sun is 8 light-minutes away, which means that the everyday sunlight as well as x-rays, ultraviolet light, and radio waves take about 8 minutes to travel from the Sun's surface to the Earth. Solar flares often also give off jets or clouds of electrons and sometimes also protons that take hours or days to reach the Earth. The x-rays and the particles can zap spacecraft, ruining multi-million-dollar investments, so even a few minutes notice allows spacecraft to go into protective modes, perhaps diminishing their power usage temporarily. Almost all of the strongest, X-class, flares that SDO has observed, including all the ones with major second peaks, lead to eruptions in the sun's outer atmosphere, the corona, called Coronal Mass Ejections, though only a fifth of the weaker, C-class, flares do so.

One of the instruments on the Solar Dynamics Observatory is devoted to measuring the extreme ultraviolet radiation from the Sun, at wavelengths from about half the wavelength of violet light down to less than only 5 percent of violet light's wavelength. This EVE instrument, the Extreme ultraviolet Variability Experiment, was designed to measure the intensity of the extreme-ultraviolet light. Principal Investigator Tom Woods of the University of Colorado at Boulder and graduate-student Rachel Hock participated in the press conference, describing EVE's total-intensity measurement. When graphed against time, a first peak that coincides with the x-ray detection by the GOES satellites is followed perhaps 90 minutes later by a broader and slightly lower second peak. The total energy in this second peak often exceeds that in the first peak, sometimes by 30 to 60 percent. All the extreme-ultraviolet radiation is absorbed in Earth's atmosphere at an altitude of about 95 km, where the heating varies greatly between solar-activity minimum, from which we are now escaping, to the expected solar maximum predicted to take place in 2013. (Earlier, Alan MacRobert and I reported in Sky & Telescope on three independent predictions that the 2013 solar maximum may be the last maximum for decades or longer, since the precursors of the following sunspot cycle have not appeared, even though they are overdue.) 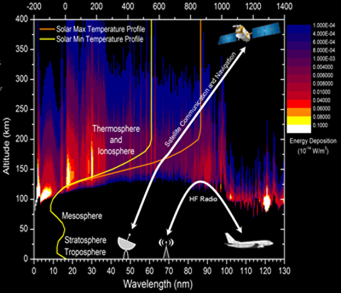 This figure shows why solar EUV irradiance is important for space weather. The colors indicate where the solar EUV radiation is absorbed in the terrestrial atmosphere as a function of wavelength and height. It also shows the vertical temperature profile of the atmosphere and how much it changes during the 11 year solar cycle.

Detailed views of the Sun at extreme-ultraviolet wavelengths from the Atmospheric Imaging Assembly on SDO was reported by that instrument's Principal Investigator, Karel Schrijver of the Lockheed Martin Advanced Technology Center. The AIA instrument on SDO sends to Earth a series of 8 images every 12 seconds, totaling about a terabyte of data a day (a terabyte is 1000 gigabytes, or a million megabytes, or a billion kilobytes). It is the rapid and repeated imaging carried out by SDO, as well as the high cadence of exposures with a set of filters that show different extreme-ultraviolet colors of light and therefore different temperature levels (ranging from a low of about 10,000 degrees to a high of about 10 million degrees) in the sun's atmosphere, that allowed the discovery to be made, whereas previous solar spacecraft had less complete color/temperature coverage and much slower cadence of observations. Movies made with AIA on SDO show a set of loops of magnetic field glowing as a flare goes off, resulting from a reconnection of north and south poles in a complicated magnetic field on the solar surface, and then, about an hour and a half later, a second set of coronal loops glowing as the heating moves outward in the solar corona, the level of the Sun best seen from Earth during total solar eclipses.

Also speaking at the press conference was Rodney Viereck, the director of the Space Weather Prediction Center of NOAA's National Weather Service. Even airplanes have to be aware of space weather, flying at lower altitudes when a strong solar flare is expected or is being experienced.

Opening the press conference was Madhulika Guhathakurta, the SDO Program Scientist at NASA headquarters in Washington, DC. She placed the solar investigations in the context of NASA's Living With a Star program, where our Sun is the star that we all live with.