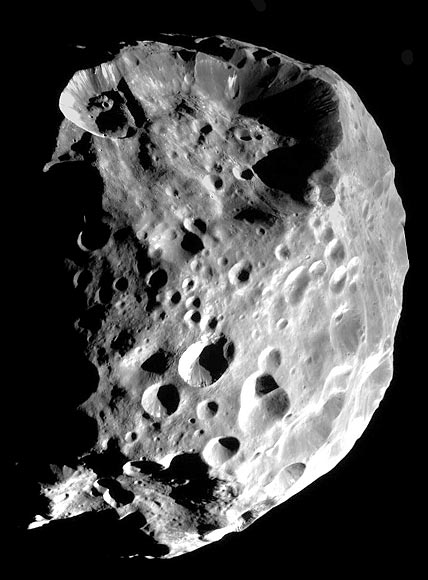 Battered by impacts large and small, Saturn's distant moon Phoebe is some 230 kilometers (145 miles) wide, about the length of the state of New Jersey. The small bright patches may be fresh ice exposed by relatively recent impacts. NASA's Cassini craft caught this image (acually a composite of two) on June 11th. Full-resolution images and more information.

In the opening act of its four-year mission around Saturn, NASA's Cassini spacecraft slipped past the outer satellite Phoebe on June 11th at a distance of just 2,068 kilometers, and its camera gave the mysterious moon its undivided attention for 1 hour 10 minutes. During that time, the flyby revealed that this enigmatic body is heavily cratered and that its very dark surface may be masking a mostly icy interior. In total, the craft observed the moon for approximately 30 hours.

Astronomers have wondered about the origin of 230-km-wide Phoebe ever since the moon's discovery in 1898. It circles Saturn at an average distance of about 12,900,000 km (nearly 0.1 astronomical unit), traveling in the direction retrograde, or opposite, that most of the planet's other satellites. During its pass through the Saturnian system in 1981, Voyager 2 glimpsed Phoebe only vaguely from a thousand times farther away than Cassini did. 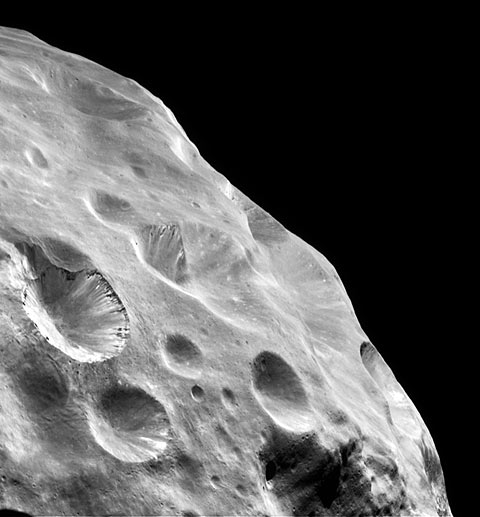 Planetary scientists, ecstatic over their first closeup views of Saturn's moon Phoebe, suspect that it is mostly ice overlain with a thin layer of darker material. The large, sharply-defined crater (relatively young) shows two or more layers of alternating light and dark matter just below its rim. Full-resolution images and more information.

Planetary scientists have known for several years that Phoebe contains at least some water ice, but Cassini's close-up scrutiny hints that there may be a great deal of it lying just below a dark surface layer. Crisply detailed images show one crater with apparent bright-and-dark layering in its walls. Mission scientists suspect that material thrown out during the impact site's formation buried a dark, older surface with a layer of bright ice exhumed from within, and since then exposure to space has driven off much of the ice in the topmost layer of this ejected debris.

The mission team expects to gain much more insight into Phoebe's true character from infrared spectra of its surface and from a determination of its mass and density. Dale P. Cruikshank (NASA-Ames Research Center), who'll help analyze results from Cassini's Visual and Infrared Mapping Spectrometer, expects the surface to be a mix of water ice, carbon, silicate minerals, and an assortment of organic compounds dominated by "tholin," a dark, tar-like residue created by long exposure to space radiation.

Dynamicists are especially interested in Phoebe because it is an especially large retrograde satellite. Most likely it is a large cometary body, perhaps an escapee from the distant Kuiper Belt, that was captured by Saturn either by tidal interactions or by an outright collision with another moon. Four years ago a sensitive telescopic search turned up at least four Saturnian moonlets with orbits roughly similar to Phoebe's, implying that they are fragments of some past collision. Whether that event occurred during Phoebe's initial capture or as some later act of satellite cannibalism remains an intriguing question. 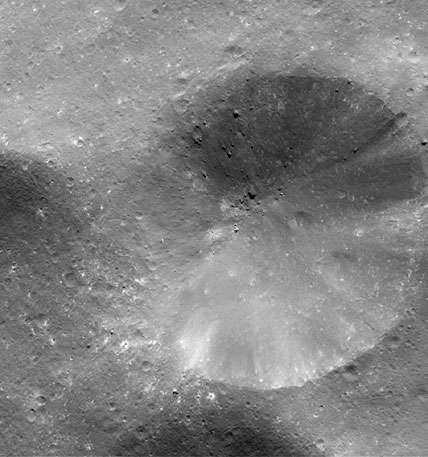 Cassini took this closeup of a 13-kilometer (8-mile) crater and its surroundings near the time of closest approach. The boulders inside it range from 50 to 300 meters (160 to 1,000 feet) across. They may have been excavated by large impacts elsewhere on Phoebe before coming to rest here. Full-resolution image and more information.

The Phoebe flyby is the first of more than 50 planned encounters with seven of Saturn's known moons. Cassini and Huygens, the hitchhiking European probe that will explore the largest Saturnian satellite Titan, will begin orbiting Saturn early on July 1st (Universal Time) after a 96-minute-long firing of an onboard braking rocket. It marks the first return visit to the planet by spacecraft since Voyager 2's historic flyby 23 years ago.