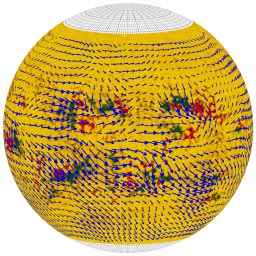 The global solar image shows average wind speeds for the region just below the stellar surface. The speeds are averages of the weather patterns observed over 14 days in April 2002. Large hurricane-like swirling winds are clearly visible.

A new analysis of observations from the Solar and Heliospheric Observatory (SOHO) reveals detailed and unexpected weather patterns not only on the Sun's visible surface but down to depths of about 15,000 kilometers — roughly two percent of the Sun's radius. The unexpected patterns include short-term giant storm systems analogous to Earth's hurricanes and Jupiter's Great Red Spot, as well as long-term variations similar to El Nino patterns on Earth. Deborah Haber and Bradley Hindman (University of Colorado) presented their results Monday at the American Astronomical Society meeting in Albuquerque. "For the first time, we can see large-scale weather systems developing on and just below the surface of a star," says Haber.

Haber and Hindman used images from SOHO's Michelson Doppler Imager telescope and examined them with a computational technique called ring-diagram analysis to measure the speed and direction of acoustic waves in small regions of the solar surface. This method allowed them to create three-dimensional maps of the wind directions at each point on the solar photosphere and below, layer by layer. The maps reveal patterns of steady, jet-stream-like flows with typical speeds of around 160 kilometers (100 miles) per hour, as well as swirling storms large enough to swallow Jupiter but lasting just three weeks.

Perhaps the most interesting find is a long-term change in flow patterns that may be analogous to the El Nino phenomenon. Haber and Hindman found that in the six years of measurements collected so far, there was a steady, uniform poleward flow in both hemispheres for the first two years. But in 1998 that flow suddenly halted and reversed direction in the northern hemisphere, starting about 10,000 km below the surface. The reversed flow has continued since then. 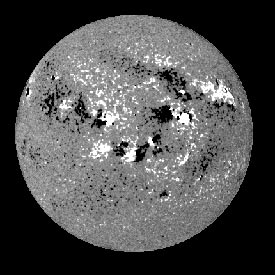 Here we see large-scale magnetic features on the Sun's surface. Recent studies using the Solar and Heliospheric Observatory have mapped weather patterns on the Sun down to 15,000 kilometers. The dark and light areas are areas where the magnetic field is pointed away or toward us respectively. This image was collected from the Big Bear GONG site

The poleward flows are important in generating the solar magnetic field and its 11-year cycle of activity. According to Alexander Kosovichev, a solar researcher at Stanford University, "the reversal of this flow is puzzling, and has important implications for our understanding of the solar activity cycle."

Monitoring these solar patterns could also play an important part in improving our ability to predict weather on the Sun that affects us on Earth — by making it possible to forecast coronal mass ejections and solar flares that can cause geomagnetic storms and disrupt electronics on satellites. "We can't predict them now, but we hope we'll be able to do that," Haber says.