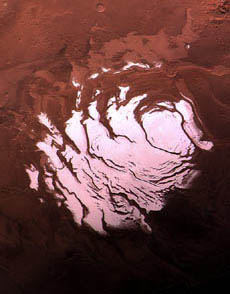 Mars’s south polar cap, as it appears near its minimum size (about 400 km across) during local summer. The true south pole of Mars lies just at cap’s edge at lower right. The Viking 2 orbiter acquired the images for this color composite in September 1977.

When future Martian astronauts head off in search of water, they'll find easy pickings at either of the planet's poles. In both the northern and southern hemisphere, a glistening white ice cap remains after winter's frost of frozen carbon dioxide ("dry ice") dissipates. Planetary scientists have long realized that there's abundant water ice in the northern cap, and new evidence has confirmed that the southern cap consists almost entirely of water ice as well.

While a topping of water ice may seem like the logical choice, confirming its presence has proved elusive — at least at the south pole. During the mid-1970s the Viking orbiters detected frozen CO2, not water ice, in the south polar region. But researchers had a hunch that abundant water was stashed there anyway. For one thing, summer's warmth causes a spike in the abundance of water vapor over both poles. And the south-polar ice is piled too high for a CO2-only cap to support itself; a firmer foundation is required.

The clinching evidence comes from two observations published in Science for February 14th. Using temperature readings from the 2001 Mars Odyssey spacecraft, Timothy N. Titus (U.S. Geological Survey) and two colleagues have identified exposures of water ice at a latitude near 85° south. Over two Martian years the icy tracts remained about 13° Kelvin colder than their surroundings — too great a contrast to be explained by dust veneers or rocky outcrops.

The 'Swiss-cheese' terrain near Mars's south pole probably consists of a thick slab of water ice overlain by a layer of dirty carbon-dioxide ice several meters thick. Images taken one Martian year apart by Mars Global Surveyor show that the dry-ice walls have eroded noticeably. The largest depressions are roughly 200 meters across.

The second investigation explored the origin for curious south-polar oddities dubbed "Swiss cheese features," round depressions that range from a few hundred meters to more than 1 kilometer across. These flat-bottomed "holes" have been grown larger as the steep walls surrounding them retreat by a few meters per year, and Caltech researchers Shane Byrne and Andrew P. Ingersoll believe they know why. They have modeled the residual south-polar cap as thick slab of water ice overlain by a meters-thick topping of dirty frozen CO2. Because the dry-ice walls are dirtier and thus darker than their topmost surfaces, they quickly become warm enough in sunlight to sublimate gradually and erode away.

One aspect of Byrne and Ingersoll's model is that, at the current rate of retreat, all of these walls will eventually meet within the next few centuries, revealing a purely water-ice cap. The implications of this for future Martian climate is significant: while the polar caps likely contain enough water to form a global ocean about 20 meters deep, there may only be enough dry ice in storage to raise the atmospheric pressure by a minuscule 0.36 millibar — just 5 percent more than its current value.