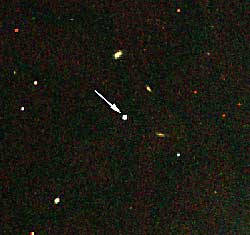 The fading afterglow of the March 29th gamma-ray burst, seen 2.6 days later by the 1.3-meter telescope at the Cerro Tololo Inter-American Observatory in Chile. By then the afterglow had faded to 17th magnitude — still bright enough to hide any trace of its underlying host galaxy.

Like the final pieces of a jigsaw puzzle on the brink of completion, tantalizing clues to the mystery of long-duration gamma-ray bursts have come fast and furious in the past few months — and they seem to be telling us at last what these enigmatic objects are, how they evolve, and what powers them. Long-duration GRBs, it seems, may simply be supernovae seen from a "privileged" perspective.

A major puzzle piece came last December 6th, when a particularly bright GRB went off in the field of view of the Reuven Ramaty High-Energy Solar Spectroscopic Imager (RHESSI). Though the RHESSI satellite was designed and launched to look for solar gamma rays, it caught the extragalactic blast with its detectors. And thanks to the burst's fortuitous location, University of California astronomers Wayne Coburn and Steven Boggs were able to use RHESSI to measure the polarization of the gamma-ray beam.

What they found was a huge breakthrough. As they explained at the American Astronomical Society (AAS) meeting in Nashville, Tennessee, and in the May 22nd issue of Nature, the December 6th GRB's gamma rays were about 80 percent polarized — an extraordinary amount. The implication: a strong, highly structured magnetic field existed at the beam's source. "The fact that we measured polarization at all means that high-energy electrons [were] spinning in a strong magnetic field," says Boggs. The burst appears to be a "magnetically driven outflow."

The next key puzzle piece came from a gamma-ray burst picked up by the High Energy Transient Explorer (HETE) 2 spacecraft last March 29th. This event was the granddaddy of all bursts — the brightest yet observed. More than an hour later, its afterglow was still shining as bright as visual magnitude 12.5 from a distance of 2.3 billion light-years. Because of its proximity (cosmologically speaking), follow-up observations announced in April allowed astronomers to conclude that GRB 030329 showed spectral fingerprint of silicon and iron — atoms created by supernovae and suspected but seen less clearly in data from other recent GRBs.

The Very Large Baseline Array, a network of 10 radio telescopes stationed around the globe, took this high-resolution image of GRB 030329. It shows an expanding fireball, akin to a supernova explosion.

Now astronomers have even more evidence of a supernova pedigree for GRB 030329. In an AAS press conference yesterday, Dale A. Frail (National Radio Astronomy Observatory) presented radio observations of the explosion's expanding blast made by the globe-girdling Very Long Baseline Array. From the VLBA data — some acquired just days before the Nashville meeting — astronomers witnessed the fireball's shock front traveling at nearly the speed of light. Furthermore, says Frail, it follows the predicted path for a supernova explosion.

A third puzzle piece came from observations by HETE-2. According to University of Chicago astrophysicist Don Q. Lamb, HETE-2 data indirectly but strongly suggest that the GRBs we see must be confined to very narrow beams of energy pointed directly toward us. The very narrow angle of the emergent beam suggests that "magnetic fields play a crucial role in GRB jets," says Lamb, since strong magnetic fields would confine and focus the particles that ultimately generate the burst of gamma rays.

The RHESSI polarization results, which independently attest to strong magnetic fields, were "the most beautiful gift one could imagine," Lamb adds.

With these discoveries — magnetic fields, supernova signatures, and collimated jets — on the table, the final piece of the GRB puzzle may be about to fall into place. In a paper being prepared for publication, Lamb argues that the cone of gamma-ray emission from a GRB is no larger than one degree across, as indicated by HETE-2. This means that GRB jets are much narrower than previously believed, and that they radiate much less total energy than once thought. Instead of implausibly converting nearly all of a supernova's explosive energy into gamma rays, efficiencies of only a few percent are necessary. Therefore, Lamb concludes, GRBs aren't the most energetic explosions in the universe — they are merely the brightest as seen from Earth.

Put differently, astronomers once thought that looking into a GRB was like looking directly into a powerful spotlight. Instead, it is more like having a low-wattage laser pointed directly into your pupil. Both lights are blinding, but the latter takes much less energy to make you squint.

Another bonus of Lamb's analysis is demographic in nature: the small beam size means that for every GRB we observe, there are nearly 100,000 others pointed elsewhere. "This is a magic number," says Lamb. "It's the ratio of what we see to the known number of core-collapse supernovae" observed in other galaxies. In other words, every supernova may be a gamma-ray burster; in most cases the beams just aren't aimed at us. 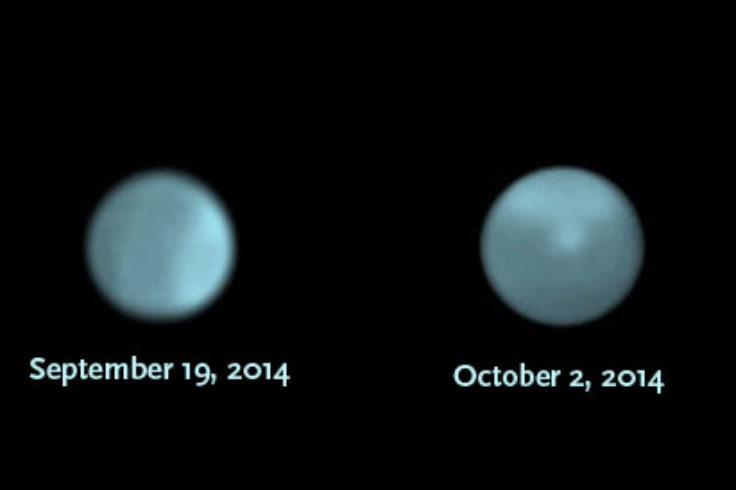