Where did the Martian meteorites called shergottites come from? A team of European researchers believe their launch pad was a fresh-looking 58-km-wide crater punched into ancient terrain less than 5 million years ago.

Imagine walking into a room full of geologists, plunking a box full of rocks on a table, and asking them to figure out where on Earth your samples came from. 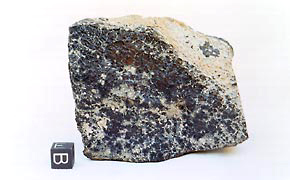 The Los Angeles meteorite, found in California's Mojave Desert, has proven to be a chunk of Mars known as a shergottite. The scale cube is 1 cm on a side.

That's the challenge facing the researchers who study meteorites from the planet Mars. The count of Martian stones now totals about 150, representing 69 discrete falls on Earth. All igneous rocks, they fall into three compositional clans known as shergottites, nakhlites, and chassignites — named for an archetype within each group. (There's one oddball, an ancient rock known as ALH 84001, that has gotten a lot of attention in past years.)

So where'd they come from? That question has dogged planetary geologists for decades. But they've now got powerful new tools — three heavily instrumented orbiters around Mars — to try to identify the interplanetary launch pads. Several researchers have suggested young-looking Martian craters as possibilities in the past. 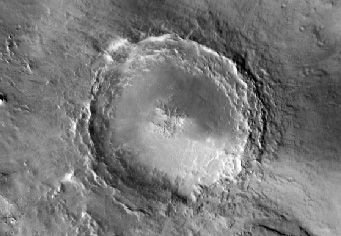 Mojave crater, 36 miles (58 km) across, is a fresh-looking crater on the ancient Xanthe Terra plain of Mars.

Now a trio led by Stephanie Werner (University of Oslo) has put forth a candidate site as the source of the shergottites. As the researchers note in the March 6th online edition of Science, the crater is surrounded by a broad apron of dusty, ejected material that bears few impact craters; this, together with other evidence, suggests to them that Mojave formed within the past 5 million years. Also, spectra obtained with the European Space Agency's Mars Express orbiter shows patches within the crater enriched in the minerals pyroxene and olivine, which are common in shergottite meteorites.

But the case for Mojave as the source crater isn't ironclad. For starters, it's a big impact — 34 miles (55 km) across. Werner and her team admit that craters of this size should occur on Mars only once every 35 to 50 million years, so a geologically recent blast of that size is statistically unlikely. 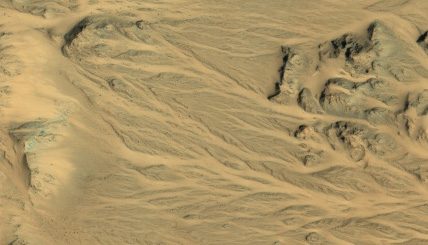 A small portion of Mojave crater's inner rim, about a half mile (800 m) wide, shows a dense concentration of water-cut gullies and deposits. The HiRISE camera on NASA's Mars Reconnaissance Orbiter recorded this scene in November 2006. Click here for larger, full-frame versions.

Moreover, the crater's rim and deposits have been crosscut by multiple sets of intersecting streambeds that end in broad fans of sediment — very reminiscent of landforms in the Mojave Desert of California and the Southwest. Geologists believe this sort of erosion occurred on Mars very early in its history — but not within the past 5 million years. Moreover, the craters flanks show several episodes of runoff; it apparently didn't happen all at once.

Werner isn't concerned, though. "It can be multiple stages even if it happened only five million years ago," she explains. "Hydrothermal systems in such a crater can easily exist for a few hundred years, and also seasonal variations may produce several episodes."

Another issue is that Mojave punched into some of the oldest rocks on Mars, a region called Xanthe Terra that dates at least 4.1 billion years ago. Further, Mojave lies at the confluence of two giant flood channels, Simud Vallis and Tiu Vallis. But most researchers consider the source rock for the shergottite meteorites to have solidified between 150 and 600 million years ago. Nakhlites and chassignites aren't dramatically older, probably 1.3 billion years. "The consensus was (and still is) that the shergottites are young," comments Alfred McEwen (University of Arizona). 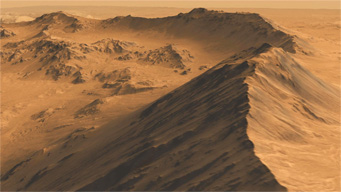 An oblique view of the rim of Mojave crater on Mars.

Not surprisingly, previous searches for the source of the Martian meteorites didn't single out Mojave but instead focused on craters in much younger terrains. "There are plenty of other young craters on Mars capable of delivering rocks to Earth with a wide range of ages," McEwen says. "Shergottites have a range of exposure ages, so they originated from multiple impacts. The claim that it must have been Mojave is very weak."

Yet Werner and her colleagues think a case can be made that shergottites really came from ancient Xanthe Terra. They note that the isotopic "clocks" used to date very old rocks are concentrated in an iron-rich mineral called pyrrhotite, which would have been vulnerable to alteration whenever the ground heated up (say, during nearby impacts). And they add that all that water flowing through the area could have altered the rocks' apparent ages as well.

This is one of those scientific whodunits for which we might never know who the "perp" really is without sending rovers to visit the most promising candidates or getting Martian samples from known locations. Until then, the search goes on.