New observations solve the origins of the Magellanic Stream, a long rivulet of gas encircling the Milky Way. 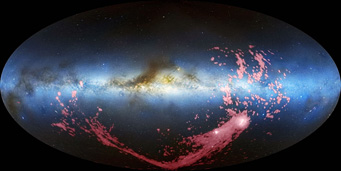 A radio image highlights the 200-degree-long Magellanic Stream (pink) against a visible-light backdrop showing the Milky Way (light blue band). The Magellanic Clouds, dwarf galaxies passing by the Milky Way, are the white regions at the bottom right.

The Small and Large Magellanic Clouds, dwarf galaxies caught in the Milky Way’s gravitational web, are dimly visible in the Southern Hemisphere sky. You’d never guess, looking at these small patches of celestial cumulus, that they are only the head of a monstrous cascade of gas spanning some 200 degrees around the Milky way.

The so-called Magellanic Stream has the mass of several hundred million Suns, gas that might someday rain down on our galaxy and spark new star formation. But to predict the Stream's fate, astronomers first have to know its origins. Andrew Fox (Space Telescope Science Institute) and Philipp Richter (University of Potsdam, Germany) headed an international team that conducted an observing campaign to piece together the Stream's history.

The faint, diffuse gas in the Stream is difficult to study directly. So rather than look at the gas itself, the astronomers pointed the Hubble Space Telescope and the Very Large Telescope in Chile toward six quasars on the Stream’s far bank.

Most of the light from these beacons pierces the fog, but specific wavelengths are absorbed as they pass through trace amounts of sulfur and oxygen in the gas. The more abundant those elements, the more light they soak up. Unlike the Magellanic Clouds, the Stream doesn’t have any stars to create new trace elements, so measuring their abundance is like taking a snapshot through a time machine.

Most sightlines through the Stream show low amounts of trace elements, comparable to the levels the Small Magellanic Cloud would have had 2 billion years ago, according to models. So the Stream's tail must have originated in the smaller dwarf galaxy, perhaps during a tidal tussle with its larger sibling all those years ago. 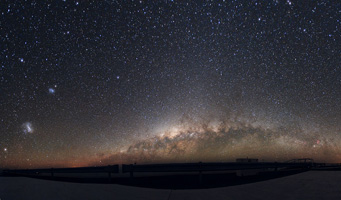 In the pristine skies above Chile's Atacama Desert, the Small and Large Magellanic Clouds stand out above and to the left of the Milky Way.

But the new observations show that's not the full story. The view toward quasar Fairall 9, close to the head of the Stream, shows high levels of sulphur, levels comparable to those found in the Large Magellanic Cloud. Apparently, the LMC has been contributing its fair share of gas to the Stream in more recent years. Why now? Because as they close in on the Milky Way, the dwarf galaxies are now running headlong into our galaxy’s spherical halo of hot gas. Just as a runner feels a wind even on the stillest day, the Clouds feel a wind as they pass through the halo, and it's stripping their gas away.

Understanding the forces that act on the Clouds isn't just important to predicting the fate of the Magellanic Stream; it also helps astronomers understand what's happening with the Clouds themselves. Astronomers used to think that the Magellanic Clouds were old acquaintances with our galaxy, completing many orbits over billions of years. But computer models, such as those from Gurtina Besla (Columbia University), had suggested that the Magellanic Clouds are only now making their first pass around the Milky Way. These observations confirm the first-pass theory, Besla says.

If the galaxies had already made many passes around the Milky Way, Besla explains, all of the Stream would be polluted with LMC gas. But if they’re just making their first pass, then the effects of traveling through the Milky Way’s halo will only be seen in the youngest portions of the stream, the regions closest to the Clouds. And that’s exactly what the observations show.

References:
A. J. Fox et al. "The COS/UVES Survey of the Magellanic Stream: I. One-Tenth Solar Abundances Along the Body of the Stream." Astrophysical Journal. 2013 August 1.

P. Richter et al. "The COS/UVES Survey of the Magellanic Stream: II. Evidence for a Complex Enrichment History of the Stream from the Fairall 9 Sightline." Astrophysical Journal. 2013 August 1.

If the LMC and SMC are making their first pass around the Milky Way, where did they come from and when did they arrive? The Milky Way is considered to be at least 10 billion years old or more in the big bang model. As the report indicated -

"Astronomers used to think that the Magellanic Clouds were old acquaintances with our galaxy, completing many orbits over billions of years."

Now it appears the Magellanic Clouds are a recent appearance compared to the big bang model age of the Milky Way.

God knows where they came from. The Andromeda galaxy is also purportedly making its first pass, in 3 - 5 billion years. // “The so-called Magellanic Stream has the mass of several hundred million Suns, gas that might someday rain down on our galaxy and spark new star formation.” It’s interesting that star-making material is being stripped from the clouds, even as both appear to be undergoing star-formation bursts.