There’s been some hype in the news media in the last few days about sugar in space. It’s true that astronomers have detected a simple form of sugar called glycolaldehyde in the gas surrounding a forming pair of stars. It’s also true that this molecule is “prebiotic,” meaning that it’s related to the formation of molecules relevant to life, such as ribose, the backbone of RNA. 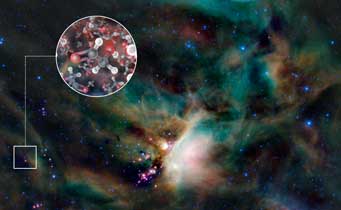 A team of astronomers has found molecules of glycolaldehyde ”” a simple form of sugar ”” in the gas surrounding a young binary star in the Rho Ophiuchi star-forming region, shown here in infrared as seen by NASA's Wide-field Infrared Explorer. The inset image is an artist's impression of the sugar molecule.

But although the discovery is definitely cool — the sensitivity of the new measurements is astounding — this discovery does not have immediate, big implications for alien life. (It might have some future, smaller implications, but I’ll get to that.)

The system in question, IRAS 16293-2422, comprises a pair of protostars, preborn stars that have coalesced from two collapsing clumps of gas and are glowing primarily from the heat released from their contracting, accreting gas. No fusion has turned on yet in either object. The protostars are young enough that they are still deeply embedded in their natal cocoons, hidden from sight. They reveal themselves by the emission from the heated gas and dust surrounding them.

An international team of astronomers studied this glowing, dusty gas with the still-under-construction Atacama Large Millimeter/submillimeter Array (ALMA), a network of radio dishes being assembled in Chile that has already made a name for itself with the incredible quality of its preliminary science observations. Using two sets of observations with a subset of ALMA’s antennas, the astronomers detected about a dozen spectral lines that clearly come from glycolaldehyde, Jes Jørgensen (Niels Bohr Institute, Denmark) and his colleagues report in the upcoming September 20th Astrophysical Journal Letters.

The team's ALMA data are truly impressive, says Paul Woods (University College London), who studies the formation of molecules in space but was not involved with the new study. “Even with a dozen dishes out of a full complement of 50 or more, they’re achieving a factor of 10 better in sensitivity than observations made only a few years ago. This is astounding.”

Glycolaldehyde has been detected in two other locations in space, in a giant cloud called Sagittarius B2(N) near the Milky Way’s center and a massive star-forming region called G31.41+0.31. Previous observations have detected a host of complex compounds in IRAS 16293, and G31.41 contains many of the same compounds, so finding the simple sugar in IRAS 16293 was not surprising. 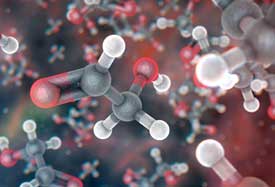 The amount of glycolaldehyde in IRAS 16293 and other molecules matches what’s expected if the sugar formed on ice-covered dust grains in the cloud before the protostars started glowing. These dust grains are like tiny grains of sand or soot, Woods explains. “Molecules from the gas can ‘freeze out’ onto their surfaces in sufficiently cold conditions — just like you get frost on leaves on a winter’s morning,” he says. Once that happens, chemical reactions can occur on the grains, forming molecules such as glycolaldehyde on their surfaces. When the young stars warm the gas up, these ices evaporate into the surrounding gas, where Jørgensen and his colleagues detected the sugar.

The sugar molecules are about the same distance from one of the protostars as Uranus and Neptune are from the Sun. But once the stars start fusion and (if) planets start forming, the glycolaldehyde might not stick around. Planet formation is warm, Woods says, and complex molecules such as glycolaldehyde would likely be destroyed before the planets finished forming. But it might survive on icy bodies further out, such as comets, which could then carry the sugar to inner planets after their birth.

That doesn’t mean life is in the future for IRAS 16293. Glycolaldehyde is one of the first steps in a long series of steps to ribose, and even if you have ribose, it doesn’t mean you have life. Furthermore, the series of reactions from glycolaldehyde to ribose is probably impossible in the system’s current conditions, meaning it’s too soon to say if this molecule could be useful to life’s formation there one day. “There is a long way to go from glycolaldehyde to ribose to RNA to DNA to cells to life,” Woods says.

Jørgensen agrees, but he notes that the argument can be looked at from both sides: glycolaldehyde is a first step along the way to ribose, so in that respect its discovery has interesting implications. “It does suggest that these molecules that are necessary for organic life as we know it are present,” he says. The question now is, how far such systems’ chemical complexity will develop and whether the sugar will actually end up in the final system or be destroyed.

SUGAR MOLECULES IN THE OPHIUCHUS CONSTELLATION, THE SNAKE-HOLDER / WRESTLER.. IF SUGAR WAS SUGAR THE SNAKE OPHIUCHUS WAS STRUGLING WITH, IT WAS A MIGHTY SNAKE :))

Why are the molecules in the background of the artist's illustration of glycolaldehydeon out of focus? So it looks like a photograph?

I am glad this report pointed out that the molecules are likely short-lived. In the ISM, molecules can have short-lives because of UV photo-evaporation too, < 10 million years. Molecules to people evolution is not as easy as some think when we consider observations like this.

Also Rod the article’s inclusion of the quote of Professor Woods is good, “There is a long way to go from glycolaldehyde to ribose to RNA to DNA to cells to life.” All of these steps and many more are gigantic hurdles for random chance to overcome in the production of intelligent, sentient organisms. No matter how long such simple “prebiotic” molecules may persist in interstellar space, saying that they will eventually evolve into life is like saying that silicon crystals on a beach will eventually spontaneously evolve into a computer.

The universe is a big place and been around a long time. Almost everywhere we look new discoveries such as these are being made.

Precursor materials appear to be very common in space so the odds are high that life will arise given enough time.

After all, it arose and evolved here on Earth, so there's every reason to suppose it will arise and evolve elsewhere too, if it hasn't already. It's a natural process favored by statistical probability.