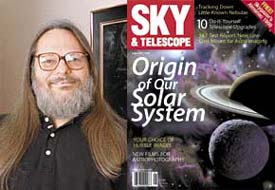 Space artists Don Davis (above) and Jon Lomberg are the recipients of the 2002 Klumpke-Roberts Award from the Astronomical Society of the Pacific. The only other space artist to win was Chesley Bonestell in 1976.

Don Davis and Jon Lomberg were honored with the Astronomical Society of the Pacific's Klumpke-Roberts Award at the ASP’s annual meeting on September 29th. Their artwork has graced 15 Sky & Telescope covers and has been showcased in movies, museums, television shows, planetariums, books, and magazines. The award recognizes an "outstanding contribution to the public understanding and appreciation of astronomy."

Davis has painted everything from interiors of giant space colonies to imaginary planets to a total eclipse of the Sun using oil, airbrush, digital, and other media. His art and animations appeared in Cosmos, Carl Sagan’s 1980 television series popularizing astronomy. "The greatest project I undertook for the show was the crafting of a 3-foot diameter Earth globe," says Davis in his online biography. "It was like painting a 4 by 8 foot extremely accurate pictorial map including surface relief using acrylic gel medium." Davis was later awarded an Emmy for his contributions. His work has also appeared in Parade, Saturday Review, and Sagan’s books Cosmos, Pale Blue Dot, and the cover of the Pulitzer Prize-winning The Dragons of Eden. 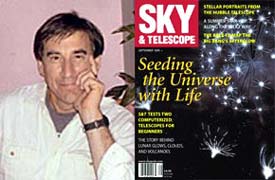 Space artist Jon Lomberg, seen here with one of his several S&T covers, won an Emmy for his work as chief artist on Carl Sagan's Cosmos.

Creator of museum displays, Emmy-winning chief artist for Cosmos, and director of space-science documentaries are some of the positions space artist Lomberg has held in his career. He created the two-minute outward zoom from Earth in the beginning of the film Contact and painted a mural of the Milky Way galaxy that hung for 10 years at the National Air and Space Museum in Washington, D.C. Lomberg was also the design director for NASA’s Voyager interstellar record, and his artwork appears in the textbook, The Search for Life in the Universe.

Michael Carroll, who like Davis and Lomberg was a founding member of the International Association of Astronomical Artists (IAAA), is enthusiastic about the ASP’s decision. "Don and Jon were active in the space-art community when only a handful of people were participating. Jon’s role in Cosmos gave vision and direction to the community, and Don lent an eloquent scientific approach to his art that was unmatched up to that time."