Spacecraft Look Back at Planet Earth

On July 19th, two of NASA's most distant interplanetary explorers &mdaash Cassini and Messenger — took snapshots of the Earth-Moon system.

These days its not unusual for an interplanetary spacecraft to take a look in the rear-view mirror to record Earth or the Moon as it races off toward its final destination. Mission scientists use those as calibration tests, but they also serve to remind us of what our home looks like from afar. 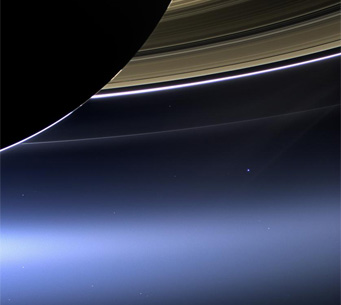 Cassini's wide-angle composite image reveals the Earth-Moon system as a bluish point of light (right of center) nestled beneath Saturn's main rings. The spacecraft recorded this on July 19, 2013, when it was 753,000 miles (1.2 million km) from Saturn and 898 million miles (1.44 billion km) from Earth. Click on the image for a larger version.

Four days ago, a pair of NASA spacecraft recorded images of Earth from very different perspectives. The result wasn't a colorful orb ornamented with blue oceans, ruddy continents, and swirling storm systems — the kind of view we're used to seeing from weather satellites. Instead, we registered as a star-like blip floating in a vast dark sea of interplanetary space.

Cassini, orbiting Saturn and having slipped briefly into the planet's shadow for the first time since 2006, captured Earth with both its wide-angle and telephoto cameras as part of a larger mosaic (33 pointings and 323 images in all) that promises to be very dramatic when completed.

Carolyn Porco (Space Science Institute) and her imaging team had used the opportunity to encourage Earthlings to wave at Saturn as Cassini snapped away. "Last Friday was a very special day in the life of our planet," she says. 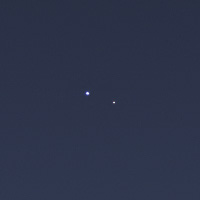 The 2000-mm focal length of Cassini's narrow-angle camera easily resolves the Earth and Moon in this close-up taken on July 19, 2013. Both are seen here through the faint, diffuse E ring of Saturn, and their brightness has been enhanced.

For now, here's a sneak peak. Just under 900 million miles (1.44 billion km) away, Earth shows up as a tiny blue-tinged dot, while the whitish Moon hovers close by. All that waving must have worked, because the telephoto images ended up a bit overexposed. So the hues you see here are derived from wide-angle images. Also this is a combination of both short exposures (for Saturn and its main rings) and longer ones (for Earth and the outer rings).

Call me a purist, but I think the wide-angle version released by NASA goes too far in boosting the brightness of Saturn's extremely tenuous E and G rings. Compare the view above with the one assembled by Gordan Ugarkovic, a Croatian space aficionado with a knack for assembling raw images into dramatic otherworldly vistas. 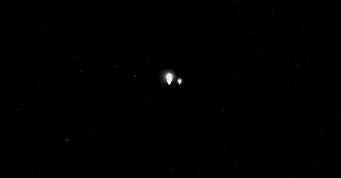 On July 19, 2013, NASA's Messenger spacecraft took this image of the Earth-Moon system from its orbit around Mercury, which at the time was 61 million miles (98 million km) away from us. Both bodies appear somewhat overexposed.

Meanwhile, Messenger took time from recording the surface of Mercury to look outward toward Earth. Technically, this snapshot was part of a campaign to search for tiny moonlets circling the innermost planet at distances of 2½ to 25 times the planet's radius — out to 38,000 miles (61,000 km). The Earth-Moon system just "happened" to be included.

Messenger's camera overexposed the two bodies as well — a consequence of the moonlet search — which caused their single-pixel disks to smear out a bit. The spacecraft was 61 million miles (98 million km) away at the time.

Voyager 1 captured Earth as a pale blue dot on September 12, 1990. The bright streak is a flare of scattered sunlight.

These aren't the first long-distance snapshots of Earth. That credit goes to Voyager 1, which in September 1990 was commanded to turn Sunward and capture a planetary family portrait of sorts. More than 4 billion miles from home at the time, it barely captured our "pale blue dot".

The fragility and insignificance of that sub-pixel blip was not lost on Voyager's imaging scientists. Among them was the late Carl Sagan, who later wrote (with Ann Druyan) an entire book on that theme. Here's a great video homage to Sagan released last year by Joel Somerfield.

Thanks for mentioning Sagan and the original Pale Blue Dot. As I commented on Facebook, I was sad to see that NASA did not in their release of the photos, sad but not surprised. And personally I think the thing about getting people to wave was just as silly as some of the other things they do these days. Maybe if we had a real space program (which is not their fault) there wouldn't be time for the silliness. Plus I wouldn't call you a purist, because my impression is that nearly all images NASA releases to the media are "boosted too far" in one way or another.