One of the "flashier" results from planetary exploration is that titanic bolts of lightning routinely zap the atmosphere of Jupiter. It stands to reason that bright discharges should occur on Saturn as well. 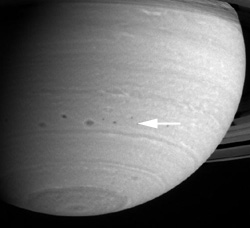 Several dark storms (arrowed) are confined to a region near 30° south latitude in Saturn's atmosphere. This turbulent region produced quite a few storms as the Cassini spacecraft approached Saturn in May 2004, when this image was taken.

Both the Voyagers (in 1980-81) and more recently the Cassini orbiter have recorded circumstantial evidence for Saturnian lightning. The ringed planet has a dynamic cloud band near 30° south, dubbed "storm alley," where localized spots often come and go, and the spacecraft have picked up radio static presumably propagating upward from the flash points.

But capturing the lightning flashes themselves has proved challenging at Saturn. For one thing, the planet's colder temperatures cause its cloud deck to lie deeper down and to be capped by more high-altitude haze (which explains why Saturn's cloud features are more muted than Jupiter's). Those beautiful rings reflect sunlight onto the planet's night side, confounding attempts to take long-exposure images.

Cassini's narrow-angle camera captured these lightning flashes on Saturn over a 16-minute period on November 30, 2009. The light-toned storm cloud is about 1,900 miles (3,000 km) long. This short clip is looping continually; NASA's original animation is 10 seconds long.

Subsequently, the imaging team zeroed in on a briefer storm at the end of 2009 that yielded enough observations to create the video seen here.

More than spectacle, the lightning reveals much about the state of Saturn's atmosphere. In an article to appear soon in Geophysical Research Letters, a team led by Ulyana Dyudina (Caltech) report that the flashes witnessed last August probably came from a single large cloud at 36° south popping off about once per minute. Given that the bright spots appeared about 120 miles (200 km) across, the researchers estimate that lightning was 80 to 160 miles (125 to 250 km) below the planet's ammonia-ice cloud tops. This would most likely place the storm cell in the middle cloud layer (ammonimum hydrosulfide, NH4SH) or possibly lower down in the water-ice cloud at the bottom of the layered deck.

These bolts zap the Saturnian sky with more than a billion joules of energy, comparable to lightning bolts on Earth and Jupiter. (Cloud-cloaked Venus is thought to have lighting too, though it's never been observed directly.) But why the lighting on Saturn is confined to its storm alley, for now at least, remains a mystery.

In addition to NASA's official announcement, you'll find other images and videos of the December 2009 strikes at the website of the Cassini imaging-science team and at JPL's Planetary Photojournal. Click here for more information about future plans for Cassini.