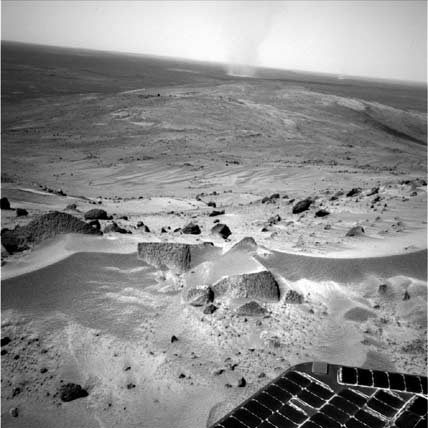 NASA's Spirit rover reached one of the two summits of Gusev Crater's Husband Hill on August 21, 2005, and took this shot of the Martian landscape. In the distance are two dust devils, a seasonal occurrence.

Still going strong after surviving nearly 500 Martian days (sols) past its projected expiration date, the Mars Exploration Rover Spirit has climbed to the top of Husband Hill where it shot this extraordinary image of Gusev Crater. Across the impact basin the rover spotted large sand drifts and active, seasonal dust devils.

The mighty rover began its hike to the summit in June 2004 and reached the crest on August 21st. For scientists at mission control in Pasadena, California, the milestone is particularly sweet. "We are thrilled beyond belief," says project scientist Joy A. Crisp (NASA/Jet Propulsion Laboratory). "It has been a struggle to get to the top, but the team was real energized." The feat is all the more impressive given that Spirit has been limping along with a balky right front wheel.

Named in memory of astronaut Rick D. Husband, commander of the ill-fated Space Shuttle Columbia, the hilltop is the highest among the Columbia Hills, rising 107 meters (351 feet) above the rover's landing-site elevation.

Spirit will continue to explore the landscape driving only every other sol. The next step, according to the rover scientists, is to survey the area for a safe route back down the hill. But for the moment, the intrepid rover can savor the majestic view — and keep an eye out for the next challenge that awaits.

Update September 2, 2005: NASA and JPL have just released a mini-panorama of Spirit's view from the summit. The press release includes new images from the mission.