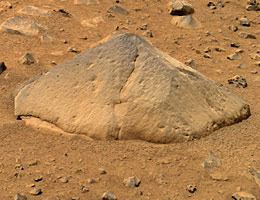 Spirit’s Panoramic Camera took this true-color image of Adirondack, which is about the size of a football. Scientists selected Adirondack for the first close-up rock inspection because it is near the lander, is relatively dust free, and has a flat surface for easy grinding.

Now that Spirit has started rolling around the Martian surface, it has begun its primary science mission: investigating rocks and soil samples up close with its imagers and spectrometers so scientists can determine, among other things, whether Gusev Crater was once a lake. "Now we’re venturing out into the field site to make more detailed observations than the ones we were able to make from the lander itself," said science team member David Des Marais (NASA Ames Research Center) at a January 19th press conference.

On January 16th and 17th, Spirit investigated a patch of soil beside the lander with its Microscopic Imager, Alpha-Particle X-ray Spectrometer (APXS), and Mössbauer Spectrometer. "For the first time, we have used all of our tools on a part of Martian real estate," said mission principal investigator Steven Squyres (Cornell University) at a January 20th press conference. "We’re starting to put together a picture of what this soil in Gusev Crater is really like."

The Mössbauer Spectrometer, which measures the abundances of iron-bearing minerals, identified three components of the Martian soil: olivine (a mineral consisting of iron, magnesium, and silicates), and two as-yet unidentified iron-rich minerals in an oxidized state. Since olivine is volcanic, it’s possible the site consists largely of ground-up lava. 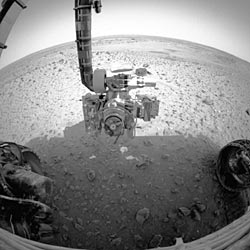 APXS identified elements such as silicon, sulfur, chlorine, argon, iron, and nickel, with silicon and iron being the most abundant. Scientists were not surprised to find silicon and chlorine because they are common at the Viking and Pathfinder sites. But APXS made the first detection of much rarer elements such as nickel, copper, and zinc.

APXS may also have resolved a question posed by the Mössbauer Spectrometer. This Mössbauer instrument touches the soil when it takes spectra, and surprisingly, the grains held together after contact. The sulfur and chlorine seen by APXS may indicate salts that act as a chemical glue that holds the soil grains together. These salts could have originated in water percolating through the Martian soil or from volcanos.

"We do not know that this soil came from Gusev Crater," said Squyres, noting Mars’s frequent dust storms. "This stuff could have come from somewhere else. It will be interesting to dig a hole, or look where Mother Nature has dug a hole." He later added, "I believe that somewhere beneath our wheels are lake sediments. But how far down do we have to go? I don’t know."

On January 18th (Spirit’s 15th Martian day on the surface, or sol 15), ground controllers successfully directed the rover 2.9 meters to a football-size rock affectionately named Adirondack for its superficial resemblance to a mountain. On sol 17, Spirit will inspect the surface of Adirondack with its Microscopic Imager, APXS, and the Mössbauer Spectrometer. The Rock Abrasion Tool will probably grind the surface of the rock on sol 18, and the instruments will look at the exposed interior on sol 19. Adirondack appears to be volcanic basalt. "We believe that this rock is probably representative of many of the rocks that we see at this site," says Des Marais.

The mission team has not decided on a plan for sol 20 and beyond, but Spirit probably will be directed to a patch of fine-grained soil less than a meter away. The vehicle will remain parked there for several sols as scientists conduct extended observations. This will enable flight engineers to concentrate their efforts on landing its twin, Opportunity, on the other side of Mars in the early morning hours of January 25th Eastern Standard Time. Eventually, Spirit will head toward a crater 250 meters away. The impact that excavated the crater ejected rocks from tens of meters below the surface, giving Spirit a chance to inspect material that might date back to the time when Gusev Crater was filled with water.

"Everything looks good for the upcoming [Opportunity] landing," says mission manager Mark Adler (Jet Propulsion Laboratory). "We don’t think there will be any more maneuvers needed, but we are continuing to track the trajectory of the spacecraft."

Spirit itself remains in excellent health. "Everything is actually working just as we expected," says Adler. "We are seeing a small amount of solar power degradation over time that matches pretty close to what we saw in the Pathfinder and Sojourner missions six years ago. But there is no unusual degradation of any of the equipment; everything is working according to spec."

With few large rocks in view, ground controllers do not anticipate any problems driving Spirit around the flat landscape. Longer drives will be attempted once the team has a good handle on how Spirit behaves on Martian soil. "From where we are right now, things look pretty wide open in terms of getting around," says rover mobility engineer Eddie Tunstel (JPL). 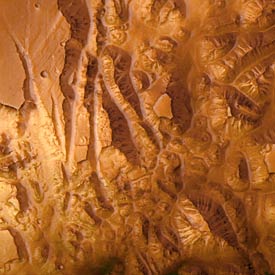 Mars Express’s High Resolution Stereo Camera shows a small portion of Valles Marineris at a resolution of 12 meters per pixel. This image is a small detail from a much larger frame taken on January 14th from an altitude of 275 kilometers.

Meanwhile, the European Space Agency’s Mars Express orbiter continues to perform flawlessly from its perch above the atmosphere. Ground controllers are in the final stages of maneuvering Mars Express into its planned 7.5-hour polar orbit. On January 19, ESA released the first image from the orbiter, which has also returned high-quality spectra. Radar observations to map subsurface water ice will commence in April. 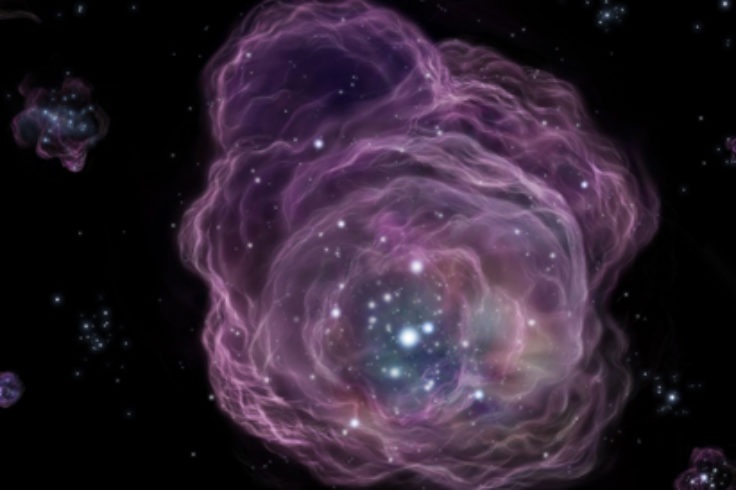 Fingerprint from the First Stars