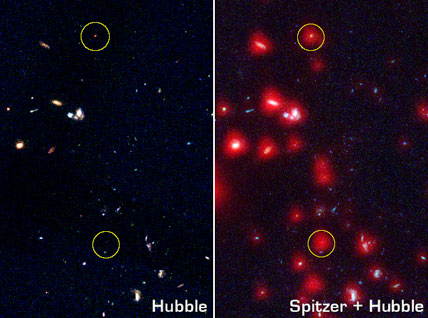 At the sites of distant celestial X-ray sources (yellow circles), the Hubble Space Telescope sometimes sees faint galaxies (top left) and sometimes not (bottom left). But deep new infrared images (right) always reveal galaxies to be hiding there after all.

In a cosmic game of hide and seek, NASA’s Spitzer Space Telescope has ferreted out the host galaxies of supermassive black holes in the young universe that had escaped identification up to now. Moreover, the Spitzer data suggest that most active galactic nuclei in the universe are shrouded from view by thick envelopes of obscuring dust. Finally, the infrared space observatory may have detected some of the very first galaxies to have formed. According to Mark E. Dickinson (National Optical Astronomy Observatory), "the performance of Spitzer is much better than originally anticipated."

Dickinson is the principal investigator for the new observations: four 24-hour exposures with Spitzer’s Infrared Array Camera of a small area in the southern constellation Fornax. This study site for the early universe has also been imaged in great depth by two other NASA Great Observatories — the Hubble Space Telescope and the Chandra X-ray
Observatory — and also from the ground. Preliminary results were presented yesterday at the ongoing meeting of the American Astronomical Society in Denver.

This much-examined little patch of sky is known as the southern GOODS field, for Great Observatories Origins Deep Survey. It contains more than 10,000 extremely faint galaxies. According to Anton Koekemoer (Space Telescope Science Institute), a few hundred of these are emitting X-rays, suggesting that they contain accreting supermassive black holes at their cores. However, seven Chandra sources have no optical counterpart at all in the Hubble image, so their nature was unknown. Now, Koekemoer finds that all of these "orphan" X-ray sources have parent galaxies after all. In the deep infrared Spitzer images, the host galaxies are "very clearly detected," he says. An example is in the lower circle above.

Why can’t Hubble see them? Koekemoer cites three possible reasons. The galaxies could be extremely dusty, with most of their visible light blocked. They may consist mainly of dim, reddish stars. Or they may be so extremely far away that all of their visible and ultraviolet light is redshifted deep into the infrared. More observations are needed to distinguish between these possibilities.

Now that every single X-ray source in the GOODS field has been identified with a galaxy, the next question for astronomers is what fraction of supermassive black holes are heavily obscured by dusty toruses. In the local universe, the figure is 75 percent. In these cases the dust blocks visible light, ultraviolet radiation, and soft (low-energy) X-rays from our view; the hole can be observed only in hard X-rays. But C. Megan Urry (Yale University) says the X-ray sources in the GOODS field are so faint that there is not enough information on their "hardness" (energy spectrum) to tell what's going on. Also, no distances are known for these sources, so it has been impossible to check whether distant supermassive black holes are shrouded any more or less often than local ones.

Here again, Spitzer comes to the rescue. Assuming that the same ratio of 75 percent applies to accreting black holes at very large distances, Urry and her colleagues estimated how many galaxies Spitzer would detect at various infrared brightnesses. Their predictions turn out to agree very well with the new Spitzer data.

The work by Urry, Padovani, and others implies that many of the faint X-ray sources in the GOODS field are extremely far — something unknown before — and that the universe indeed harbored a huge population of hidden supermassive black holes even when it was very young. According to Padovani, "This discovery means that surveys of powerful supermassive black holes have so far underestimated their numbers by at least a factor of two, and possibly by up to a factor of five."

Finally, Haojing Yan (Spitzer Science Center) presented observations of 17 extraordinary red objects — most likely distant galaxies — that appear bright at Spitzer’s infrared wavelengths but are all but invisible in the Hubble deep image. Most of them are not seen by Chandra either, so they probably do not contain an accreting supermassive black hole. Yan suggests that these unique objects are the "descendants" of the very first galaxies in the universe, seen at an age of 2 billion years or so. If he is right, the radiation seen by Spitzer may come from the very first generation of stars.

Alan Dressler (Carnegie Observatories) says that Yan’s proposal is "interesting but controversial." He notes that some theories predict the first galaxies do not even survive for 2 billion years, but are instead completely blown apart much earlier by the supernova explosions of the very massive stars expected in the first stellar generation.

Still, Dressler is excited about the new results. "The Spitzer Space Telescope is extremely good at unshrouding things," he says. "This shows why we are moving into the infrared." Indeed, according to Dickinson, the current results are "a preview of the science we will carry out with the James Webb Space Telescope." This giant, proposed infrared successor to Hubble is expected to launch in 2011.