One of amateur astronomy's most important and rewarding annual rites is Astronomy Day, when hundreds of local clubs provide the public with an introduction to the wonders of stargazing. It's a great opportunity to get an up-close look at — and through — telescopes big and small.

This past year Astronomy Day fell on May 2nd, following a trial autumn event last September. Afterward the Astronomical League judged which events did the best job of fulfilling the goal of "bringing astronomy to the people," and now that the voting is over I'm pleased to announce the winner of this year's S&T Astronomy Day Award. 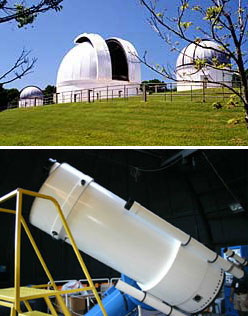 George Observatory, southwest of Houston in Brazos Bend State Park, boasts a 36-inch telescope along with 18-, 14-, and 11-inch instruments.

Winner #1 is a consortium of clubs in the Houston area who banded together for a mega-event at George Observatory, located about 30 miles southwest of the city. Home to NASA's Johnson Space Center, Houston is a big, astro-attuned metropolis, so it's little wonder that thousands of people came out for the event last October 20th.

The 6-hour-long bash included too many speakers and events to list, but you can relive the day in words and pictures here. All told, 140 volunteers banded together from the following organizations:

Winner #2 couldn't be more different. The Local Group Astronomy Club, located in Southern California's Santa Clarita Valley, is a small club with big ideas. Its members took a tried-and-true route for their Astronomy Day observance, setting up exhibits and demonstrations in a local library on June 10th. And at day's end they'd spent less than $200 (compared to $4,500 for the celebration at George Observatory). 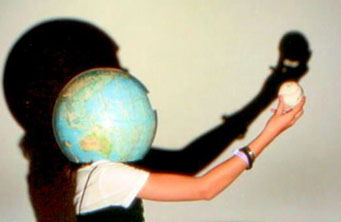 Participants got a chuckle while learning "How Big Is Big, and How Far is Far?" during the Astronomy Day activities hosted by the Local Group of Santa Clarita Valley (California).

What set the Local Group apart was the event chairman: 13-year-old Maxwell Ward. According to club president Steve Petzold, Ward is a "prodigious amateur astronomer" who took over much of the planning and coordination of June 10th's activities. He was ably assisted by 12-year-old Christian Borao and, of course, adult members of the club.

Read about the Local Group's activities at the club's website or, better yet, check out its YouTube video about the day's events.

If your club participated in Astronomy Day, please do me two favors. First, add a comment below to let everyone know what you did and how things went. Second, mark your calendar for May 2, 2009, and make sure you're in the running for next year's S&T Astronomy Day Award!

Congrats to both groups. It's important to educate the public in astronomy. It is also impressive that such a youngster took on such a large event from the ‘Local Group’. I would love to know how many people attended both groups Astronomy Day events last year.

Being inquisitive, I went out and looked at the rules for this award to see how our club could participate. I'm copying below rules 5 & 6 below:

5. One primary prize winner will be chosen and notified by July 31st.

My question is... How could there have been a tie if there should only be one primary and one honorable mention winners according to the rules. Did S&T or the league flub something up?

Again, congrats to both groups. Keep educating, but most importantly, have fun!

Congratulations to the winners and thanks to the judges. This award has been featured on my nationally-syndicated Space News column:

What a great thing to write about. I have a big smile as I'm typing this--thanks so much!