A supermassive black hole spotted last year as it ripped a star apart and spat out a jet had another surprise up its sleeve: a short-lived X-ray heartbeat seen only once before from a galaxy’s central beast.

Last year, astronomers reported a brief flare from a distant supermassive black hole that suggested the leviathan had torn apart and gobbled a star, much as a toddler eats a bread roll. (Both black holes and toddlers are messy eaters. Although, toddlers don’t usually produce plasma jets when they feed.) 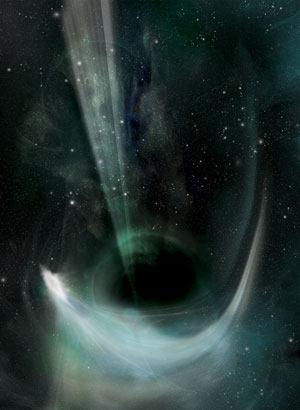 In this artist's conception of a black hole ripping apart a star, the star is stretched and shredded as it passes too close to the black hole. Some debris swirls into a disk of accreting material, while leftovers shoot out as a powerful jet.

Additional X-ray observations of that 2011 event have also caught a rare, beat-like signal, researchers report in this week’s Science. Although many stellar-mass black holes produce such signals, called quasi-periodic oscillations (QPO), this event marks only the second time that astronomers have seen a QPO from a supermassive black hole. And unlike the previous example, observed in 2008, this black hole has never emitted anything noticeable before its recent outburst.

As their name suggests, quasi-periodic oscillations are semi-regular beats in X-ray brightness, and they appear in the emission from furiously accreting black holes and neutron stars. Mysteriously, they’re not permanent fixtures; they can switch on and off. Astronomers don’t agree on what exactly causes QPOs, but they do know that they happen during specific accretion states.

In the case of Swift J164449.3+573451, this accreting material came from the shredded star, explains study coauthor Rubens Reis (University of Michigan, Ann Arbor). The black hole then somehow processed that material to create the QPO signal, which came through in XMM-Newton and Suzaku X-ray observations as a signal that repeated about every 200 seconds.

“One of my collaborators very imaginatively described this as being able to hear the star screaming as it gets devoured,” Reis says. “I think that sounds a little bit dark.”

Despite the lack of a unified QPO theory, most ideas about how these events arise agree that the QPO’s frequency should relate to the size of the innermost stable orbit around the black hole. Gas inside this orbit stops following a slow inward spiral toward the event horizon and instead starts plunging straight into the abyss. (This orbit doesn’t exist in Newton’s law of gravity, it’s a unique feature of Einstein’s general relativity.) The size of the innermost stable orbit depends on the black hole’s mass and spin. Ideally, that means that, with the right QPO theory, astronomers could determine the black hole’s mass and spin simply from spotting one of these beating X-ray signatures, says Alexander Tchekhovskoy (Princeton) — and mass and spin are basically all you need to know about a black hole.

“Once some smart theorist comes up with a model that is able to explain most of the QPO observations, we will say ‘Aha! That must be what’s going on,’” he says. “Then we can apply that model and actually learn something about the system.”

Assuming that the QPO’s frequency was set by the innermost stable orbit, Reis’s team estimated the black hole’s mass is between 450,000 and 5 million solar masses (depending on whether the black hole spins or not). That number roughly agrees with previous predictions based on other methods.

Andrew Levan (University of Warwick, England), who was on one of the teams that first reported the Sw J1644+57 event last year, says what’s exciting about the detection is that it confirms that black holes of various sizes accrete in similar ways, even when the source of that material is different. He also notes that, because these signals come from so close to the black hole, general relativity becomes extremely important.

Reis agrees that the chance to probe general relativity, especially at far distances — the Sw J1644+57 galaxy is approximately 5 billion light-years away — puts him in a tizzy. “I cannot convey the enthusiasm I have for this,” he says. “It’s a beautiful thing.”

QPOs are rare around supermassive black holes because these black holes are so wide. In order to see a flicker from a distant object, the flicker’s duration needs to be longer than the time light takes to travel from one side of the object to the other. (Otherwise, flickers will add together and even out the emission.) Stellar-mass black holes are much smaller in size than supermassive ones — the event horizon of a non-spinning, 10-solar-mass black hole is just under 20 miles wide, while that of a 10-million-solar-mass beast is 20 million miles wide, smaller than Mercury’s orbit. That means astronomers can spot much faster flickers from stellar-mass black holes than from their big brothers, making them easier to detect.

What's true for flickers holds for accretion states, too. A small black hole can go from feast to famine and back again in a matter of days, whereas a supermassive black hole might take thousands of years to transition.

Tchekhovskoy notes that the QPO may not be a feature of the disk itself, but rather of the jet that the accreting black hole spits out. This jet is a drill-like bundle of magnetic field lines that threads the black hole and the accretion disk, rather like spaghetti threading an olive. As the spinning black hole whips this bundle around, the bundle could bounce left and right against the inner edge of the accretion disk, producing the beating frequency seen as a QPO, he and his colleagues have suggested. Whether the QPO comes from the jet or the disk, it can probably still be used to extract the black hole’s mass and spin.

If you'd like to see what a stellar death-by-black hole might look like, check out this video from NASA Goddard's CI Lab of the Sw J1644+57 event (no QPO is shown):