Astronomers have added another star to the group of rowdy stellar children running around the skirts of the Milky Way's central black hole.

An international team of astronomers has tracked a star that whizzes around the Milky Way’s central supermassive black hole in only 11.5 years. The star, labeled S0-102, has the shortest orbital period yet for any star discovered looping around our galaxy’s hidden beast, the astronomers report in this week’s Science. The previous contender for shortest-period star, S0-2, makes the trip in 16 years. 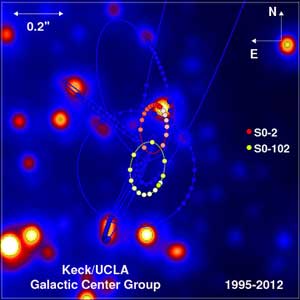 The orbits of stars within the central arcsecond of our galaxy appear here as pearl-necklace-esque rings over an image taken of the region in 2012. The green orbit is for the newly announced star, S0-102; the red orbit is the second-shortest orbiter, S0-2.

The team, led by Andrea Ghez (University of California, Los Angeles), has tracked the star since 1995 using the Keck Observatory on Mauna Kea. The team used two techniques: so-called speckle imaging, which teases information about an observed star from distortions (“speckles”) created by atmospheric turbulence, and (since 2004) adaptive optics, which warp a telescope’s mirror a thousand times per second to remove these atmospheric distortions from images.

The two-pronged approach allowed the team to carefully plot the orbit of S0-102, which comes within a couple hundred Earth-Sun distances of the black hole. (For comparison, the Sun lies roughly 270,000 Earth-Sun distances from its closest stellar neighbor, Alpha Centauri.)

Astronomers care so much about these stars because shifts in their orbits as they zoom around the black hole might confirm Einstein’s general theory of relativity. Although the theory’s held up to every test thus far, it’s never been explored in the extreme-gravity environment right around a supermassive black hole. Astronomers need more than one star to break apart the different influences on stellar orbits in the leviathan’s crowded environs, so while S0-102 is not important on its own, combined with the other stars near the black hole it could provide the additional insight observers need.

Stefan Gillessen (Max Planck Institute for Extraterrestrial Physics, Germany), who works with an independent team that also studies our galaxy’s center, confirms he and his colleagues have calculated the same orbit for S0-102 as Ghez’s team. But he’s skeptical of the star’s usefulness for studying this region, because it’s quite faint — S0-2 is 16 times brighter. That will make detecting minute shifts in its orbit more difficult. 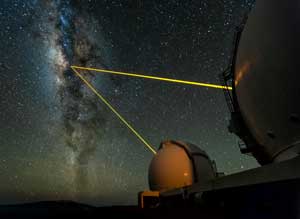 Lasers shot from the W. M. Keck Telescopes on Mauna Kea create an artificial star in Earth's atmosphere that allows astronomers to measure the atmosphere's blurring effect and correct for it as they observe by slightly deforming the telescopes' mirrors.

Ghez says that these minute shifts won’t lie beyond astronomers’ reach for long. Planned upgrades to Keck should allow observers to detect them in the faint star’s spectra.

Astronomers also expect that the next generation of super-telescopes — including the hoped-for Thirty Meter Telescope and the European Extremely Large Telescope — will give them the precision they need to watch the precession of the stars’ elliptical orbits, the rotation of the stars’ orbits with time that makes the stars draw rosettes around the black hole instead of single loops. Accurately predicting the precession of Mercury’s orbit around the Sun was a major achievement of Einstein’s gravity.

S0-102’s discovery also highlights a long-standing mystery: although the galactic center is crowded, it’s not as crowded as astronomers think it should be. The black hole should only be able to tear apart stars that swing within a few Earth-Sun distances, but so far all the stars seen near the Milky Way’s black hole keep 100 times farther back, including S0-102. In that sense, S0-102 is actually “bad news,” says Abraham Loeb (Harvard-Smithsonian Center for Astrophysics), because if astronomers can see such dim stars, they should be seeing a whole lot more of them.

Loeb and his student Gongjie Li suggested last month in a paper on arXiv.org that the stellar dearth might arise because the black hole’s reach is a lot longer than expected. Although the beast can’t rip stars apart until they’re on its doorstep, it does pull on more distant stars as they pass, just as the Moon pulls on Earth’s oceans and creates the tides. This stretching causes the star’s insides to jiggle, and the shaking heats the star. With a hotter interior, the star swells. But a larger star is more vulnerable to the black hole’s pull, so after about a million swings around the black hole the bloated star could be destroyed. Such “tidal heating” would extend the black hole’s influence roughly 10 times farther than the standard star-shredding limit, although not nearly to S0-102.

Ghez says she really likes Loeb and Li’s paper, because it’s the first to look at what this heating process could do to short-period stars. It’s possible that tidal heating could explain why stars don’t huddle as close to the black hole as astronomers thought they should, she says. That might make S0-102’s tight orbit all the more unique.

G. Li and A. Loeb. "Accumulated Tidal Heating of Stars Over Multiple Pericenter Passages Near Sgr A*." arXiv.org, 5 September 2012.

Does anyone have any more info about SO-102 and it's orbit? The only stats about it I've found is as reported here, 16 times dimmer than SO-2 and in a 11.5 year orbit. The mass of SO-102 and any two parameters about the size of it's orbit would make the calculation of the SMBH's mass and the star's max velosity possible.