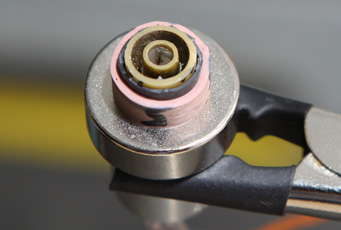 A close-up look at a Starbug, a miniature robot used to position optical fibers. The technology is being developed to aid future surveys that will net spectra of huge numbers of stars and galaxies.

The robot buzzes loudly as it scuttles across a glass plate with micron-sized steps. It looks like a miniature version of a car’s cigarette lighter. Legless and armless, it’s carrying a bundle of fiber optics that will one day capture the light from a galaxy more than a billion light-years away. And it’s not alone. Eventually, dozens (and even hundreds) of these Starbugs can join forces to collect the light from 100,000-some galaxies.

Big surveys, such as the Sloan Digital Sky Survey, have long used fiber optics to measure spectra of huge numbers of objects. Light from the galaxy travels along the fiber and into a spectrograph, which splits the light into a spectrum.

In the old days, locals were hired to place each fiber at the position of each galaxy or star in the field of view. Then robots were developed to do the job, picking and placing each fiber one at a time. But for the big surveys currently under development, this one-at-a-time method is too time-consuming. 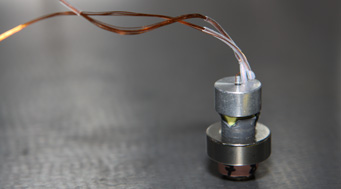 A Starbug leeches onto a plate with the force of the vacuum applied between the two cylinders. The concentric cylinders act as "legs" that can shuffle in micron-sized steps across a smooth surface.

The Australian Astronomical Observatory’s planned Hector survey, for example, will observe 100,000 galaxies up to 1.5 billion light-years away. To do that, the instrument will need to place at least 52 fiber bundles (and possibly 117, under a more ambitious design) per plate, with the plan to observe four plates per night. Even in superb conditions, that would leave observers about two hours for each plate, time they don’t want to eat up plugging and unplugging cables.

That’s where Starbugs come in.

This diagram shows how the Starbug walks on its two cylindrical "legs." By applying a voltage to the ceramic material, it moves first the inner cylinder, then the outer one to take micron-sized steps.

The Starbug design is simple: two cylinders of ceramic are nested one inside the other like Russian dolls, attached at the top by a solid ring. The material is piezoelectric, so when a voltage is applied, the inner cylinder bends ever so slightly as the top cylinder lifts, enabling the device to shuffle along a smooth surface. A vacuum applied to the space between the cylinders keeps the whole device pinned to the glass plate. Computer algorithms tell each Starbug where to go, and how best to avoid crashing into its brethren.

With Starbug or similar technology, Hector will observe gas flowing in, out, and within 100,000 galaxies, allowing astronomers to watch galaxies grow and evolve. Hector is still in the planning phase, but its prototype SAMI (inexplicably short for Sydney Australian Astronomical Observatory Multi-Object Integral Field Spectrograph) is already up and running, with 100,000 spectra of 600 galaxies. (Because it runs on a smaller scale, SAMI does not use the Starbug technology; each fiber is manually plugged on a metal plate using magnets.)

Watch Starbugs in action in the video below. The buzzing sound you hear is "the 'tap dancing" of the bugs' feet on the glass, explains James Gilbert (AAO). (Note: these Starbugs are using magnets to attach to the plates, which is an older technology. Newer Starbugs use vacuum instead.)