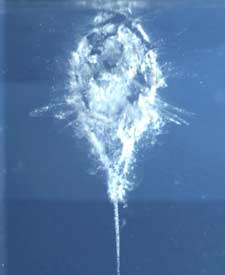 Each particle that hit Stardust's aerogel collection paddle left a unique trail. By analyzing each trail, astronomers can learn about the particle's velocity at the time of capture and how much it broke apart during impact.

If comets coalesce in the coldest parts of our solar system, why do they contain crystals that formed under extremely hot conditions? That's the mystery confronting scientists working on the Stardust sample-return mission.

On January 15th the Stardust spacecraft safely returned dust from Comet Wild 2 to Earth. Shortly thereafter, team members began their analysis of the captured grains. Much to their surprise, the scientists found numerous minerals that formed very close to the Sun. But conventional wisdom says that comets represent ingredients that came together at the farthest reaches of the solar system, well beyond the orbit of Pluto.

Stardust's aerogel collection paddle contained thousands of particles. Most are less than 50 micrometers across. But around 45 grains are visible to the unaided eye.

In just the first few weeks since Stardust returned its cargo, astronomers sent out more than 150 samples to laboratories worldwide. Analysts have already detected a host of minerals, including olivine, spinel, anorthite, and pyroxene. Many of these crystals have melting temperatures higher than 1,100°C (2,000°F).

How the crystals migrated from a hot spot to the cold outer solar system remains a mystery. Perhaps they were ejected outward early in the solar system's formation. Or maybe they were heated by a passing star. The answers will become clearer after the Stardust team conducts detailed isotopic measurements on the particles.

For now the researchers are still basking in the afterglow of a successful mission with the promise of amazing science results to come. "I just can't believe this actually is a piece of a comet," says Donald Brownlee, Stardust's principal investigator, "a comet that formed 4½ billion years ago."

These early findings are just the beginning. Stardust's collection paddle had two sides: one was designed to grab comet pieces, the other to grab interstellar dust. Astronomers plan to begin their initial analysis of the interstellar samples in the coming weeks.