Downtown Washington may be awash with light pollution, but the stars came out last night for an evening of stargazing on the White House South Lawn.

The president is pressing for dramatic improvement in the quality of U.S. science and math education, and he's now twice urged the nation's youth directly to study hard and reach for the stars. In his opening remarks, the president challenged the assembled students to strive for greatness. "What will your great discovery be?" he asked. "Galileo changed the world when he pointed his telescope to the sky. Now it's your turn." 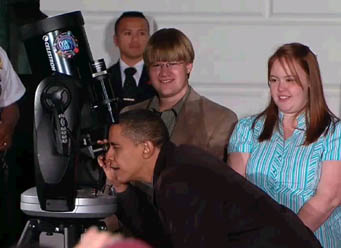 Standing at President Obama's side were two teenagers who've already made a difference: 14-year-old Caroline Moore, who last year became the youngest person to discover a supernova; and high-school sophomore Lucas Bolyard, who discovered a pulsar in archived radio-telescope observations.

You can watch President Obama's opening statement — and take a quick peek at the Double-Double in Lyra through a Celestron 8-inch telescope — on YouTube.

Thank You so much for helping to make this happen!!

There were some pretty impressive people in attendance at the White House, including two beaming young teens who were given special recognition by the President. The whole event was worth it just for that moment. Two kids, girl and boy (perfect), recognized for scientific achievement... sends a GREAT message.
I am happy to know the President's children attended too although not on camera.

We had clear skies here in Chicago for our local celebration at Adler Planetarium. I so very much appreciate their kindness in opening the first planetarium of the western hemisphere up for this event. The wind on the lakefront was even quiet with mild temperatures. We watched the butterscotch Moon rise from the water. It was a charmed night indeed. Volunteers set up their telescopes including Chicago Astronomers' Joe Guzman and Chicago Astronomical Society's Joe Meyer. The Doane Observatory was opened as well. Professional astronomers including Mark Hammergren, Larry Ciupik, and Adler VP Lucy Fortson attended and shared their cosmic enthusiasm and knowledge. We munched on Moon Pies, Starburst, MilkyWays, Eclipse Mints and Orbit Gum. Kids received planispheres and everyone received a keepsake pin. Galileoscope was present. Meteorites from the Moon and Mars were touched and admired. The classrooms were opened up to view the live broadcast of the President. We all signed a planisphere and took photographs to send to the President to thank him for Astronomy Day at the White House and will suggest it become an annual event.
The live chat with Sally Ride and Dwayne Brown with star party visible in the background until the next morning was a bonus outreach.
How can we best get White House Astronomy Day scheduled as an annual event? Send in YOUR LETTERS of support to Pres and Mrs Obama; your letters worked before, they'll work again!!

Thanks again,
We DID it! It HAPPENED!

My wife and I watched the proceedings on Nasa.TV that evening. During the president's remarks, my wife pointed out what looked like a Celestron CPC scope standing off to the side. Sure enough, the president and first lady started off the official star party by looking through a Celestron CPC 800 8" SCT! I own the 11" model, and as a life-long Celestron devotee, couldn't have been more proud at that moment! What a terrific advertisement for a terrific company! Go, Celestron!

I think that president Obama's support of young astronomers is one of the many great things that he has already done in his relativeley short presidency. I want to echo a previous member's comment of "YES YES YES!!!!"

This is one "primo Pres" who walks the talk, and really gets out amongst the people. Let's just hope with all that global recession, he can find increased NASA & Astronomy funding, to keep Galileo's momentum accellerating along.

My little black kitten (born 20 Dec 2008, and abandoned barely 4 weeks later) was able to observe Comet Lulin through my 11.5cm f8 Newtonian as early as January this year. An old brass Erfle was used, and she really purred at the twin tails. She's named "Obama" after your President...so, the Kiwi Obama got to star-gaze 8 months before her more famous human name-sake.

If the "Pres" ever visits NZ, the sight of Omega Cen, the Jewekbox, Tarantual Nebula, and 47 Tuc, will totally blow his mind. My little "Obama" already finds these "purrfectly" impressive, herself. Kiwi Prime Minister John Key (recently on the David Letterman show) would be surely thrilled to have the Pres over here (and so would the rest of us admiring Kiwis)!

I was very excited when I found out Obama was going to host a star party at the white house. I hope this will get more kids into astronomy and to admire the universe. Even more spectacular Obama had two young kids that had made very astonishing discoveries. I'm glad he reached out to kids and told them not to give up on their dreams