Stars in the Middle of Nowhere

Stars form in galaxies, right? Usually, but apparently not always. Astronomers have found several young star clusters that don't belong to any particular galaxy. "They're in the middle of nowhere," says Duilia de Mello (Catholic University of America and NASA/Goddard Space Flight Center), who described her team's discovery at this week's meeting of the American Astronomical Society in Austin, Texas. 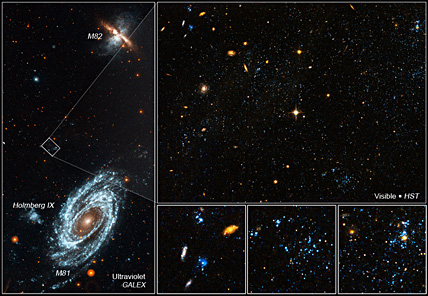 An ultraviolet view of galaxies M81 and M82 in Ursa Major, from the GALEX spacecraft, reveals numerous "blue blobs" in the space around them. Close-ups from the Hubble Space Telescope resolve these clumps into myriad stars. These appear to have formed in the wake of a collision between M81 and M82 about 200 million years ago.

The clusters announced their presence in ultraviolet images of the Messier 81 galaxy group made with NASA's Galaxy Evolution Explorer (GALEX). Located in Ursa Major near the bowl of the Big Dipper, the group includes the stately spiral M81 and cigar-shaped M82, an irregular galaxy undergoing a burst of star formation. 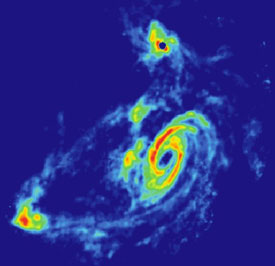 This map shows radio emissions from hydrogen gas in and around the galaxies M81 (the large spiral), M82 (top), and NGC 3077 (lower left). The three systems are locked in a gravitational embrace, as evidenced by the tidal arcs of gas torn out of the galaxies during their interactions.

GALEX found a motley assortment of unidentified "blue blobs" scattered through intergalactic space near the galaxies.

M81, M82, and another galaxy known as NGC 3077 are known to be participating in a three-way cosmic ballet. Radio maps show the trio enmeshed in a vast swirl of hydrogen gas torn from the galaxies during close encounters between them. The blue blobs seen by GALEX appear coincident with a gaseous arc called Arp's Loop.

As it turns out, this region had been viewed by the Hubble Space Telescope's ultrahigh-resolution Advanced Camera for Surveys. Upon pulling the image from the Hubble archive, de Mello and her colleagues were astonished to see the blobs resolved into clusters of stars. The gas in Arp's Loop was thought much too rarefied to condense into stars.

Judging from their brightnesses and colors, the clusters appear quite young, with stars ranging in age from 10 million to 200 million years. Not coincidentally, M81 and M82 had their last close interaction 200 million years ago, and Arp's Loop is thought to have been drawn out of the galaxies during the mashup. De Mello proposes that turbulence from the encounter created some knots of gas dense enough to trigger star formation, leading to the free-floating clusters we see there now.

This report raised several questions in my mind. Would these inter-galactic star clusters be subject to more or less disruptive influences than galactic open clusters? At first blush, I'd think less from lack of dispersing material, but we're considering galactic tides here, so I'm not so sure. Would it be possible for a galaxy to recapture one these clusters without dispersing it? Again, at first thought, considering the Milky Way is disrupting globular clusters into streams as they orbit, probably an open cluster would be even more rapidly ripped apart. But, what about clusters like NGC 188 and M67? Is it a remote possibility these ancient clusters formed beyond the disk of the Milky Way and were gently incorporated over time? Last question: Has a similar study been done, or is being contemplated, with the Sculptor Group? Thanks for the space to express my questions.