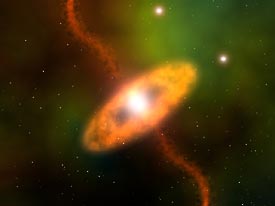 An artist's concept of star W43A. Radio observations have revealed twin jets of water and a circumstellar disk, which suggest that the star will soon become a planetary nebula.

A star known as W43A in Aquila is on the verge of becoming a planetary nebula. Last week Japanese and British astronomers announced that the star, lying some 8,500 light-years away, is beginning to show signs of things to come, in the form of two water-rich jets streaming from it.

W43A is in its final days. It is believed to have once been about the size of our Sun and since used up its hydrogen fuel and ballooned into a red giant, surrounding itself with a disk of dust. The giant will eventually shed its outer atmosphere and form a planetary nebula, while its core will collapse into a white dwarf. One of the enduring puzzles about planetary nebulae is why they have the shapes they do. A star's spherical outer atmosphere somehow is cast away in two lobes of material. W43A's twin water fountain may provide some clues.

Previous surveys of W43A revealed microwave emission indicative of several excited molecules, including water. Hiroshi Imai (National Astronomical Observatory, Japan) and his colleagues used the Very Long Baseline Array (VLBA) radio telescope to make detailed observations to pinpoint where the emission of water was coming from. In the June 20th Nature, they describe finding that the water is spread along two arcs extending some 500 astronomical units (75 billion kilometers) on opposite sides of the star. The jets also have a corkscrew shape, suggesting that the source of the water streams is gradually precessing.

The astronomers explain that signature of water implies that we're seeing the star at a critical stage. "Our analysis of the water jets indicates that they are only a few decades old," Imai notes. When W43A collapses and heats up, its radiation will disperse the water molecules. This suggests that the star is just now starting its planetary-nebula stage.