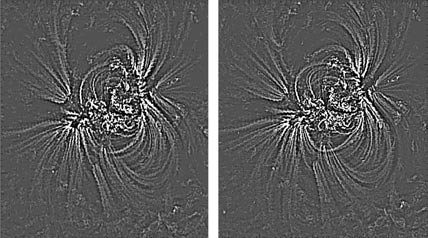 Contrast has been boosted in these extreme-ultraviolet images of a sunspot region taken simultaneously by STEREO B and A. The spacecraft were 31 million kilometers (19 million miles) apart. The coronal loops and streamers are glowing in the light of ten-times-ionized iron atoms.

To see the view in 3D, face the screen square-on and let your eyes drift apart as if gazing off into the distance. Between the two images a third will appear. When you get the spacing of your views just right, this image will lock into a three-dimentional scene with the coronal arches and streamers extending toward you. The effect improves the more closely you examine the details. (It may help to be a bit nearsighted; if you have reading glasses, use them.)

Have you ever looked at a picture of the Sun's corona — or at the real thing during a total eclipse — and wondered what's the actual, three-dimensional shape of this weird structure so rich with detail? So have solar physicists, and now they're finding out.

At the largest scale, the Sun's corona (outermost atmosphere) consists of so-called streamers: huge, pointy cones of enhanced density. On a more basic level, everything in the corona is made up of overlapping loops, sometimes with their tops blown indefinitely upward.

The magnetic-field loops are rooted in the solar photosphere (the visible-light surface), where they also cause phenomena such as sunspots.

The fields on the surface can be mapped readily, by analyzing the effect they have on the photosphere's light in a "magnetogram" image. From that, physicists can extrapolate the 3D shapes of the magnetic loops and streamers that must exist high above. For decades solar astronomers have attempted to re-plot 2D images of the corona into three-dimensional views this way. What was missing was a test of these bold modeling attempts — until now.

Our view of the corona changed in 2006 when NASA launched two nearly identical spacecraft into orbits similar to Earth's but drifting slowly away from us in opposite directions. The aptly named STEREO mission is viewing the Sun from an ever wider separation angle and can, for the first time, unravel directly the corona's complicated structure.

The first successful attempt has now been published by an international group using the Extreme Ultraviolet Imagers of STEREO's SECCHI instrument suite.

The researchers had a clear view of many magnetic flux loops that, rather than scattering sunlight, emit their own light in the extreme ultraviolet (EUV). Dozens of these loops were indentified in images from both spacecraft taken on June 8, 2007. The craft were 11.8° apart (as seen from the Sun) at the time. At this wavelength, it's not electrons we see but highly ionized iron atoms (Fe XI) — which, at a temperature of 1.1 million kelvins, emit EUV light at 17 nanometers. The contrast of the images was greatly enhanced by an unsharp-mask filter.

It was still necessary to include a certain amount of modeling to deduce the three-dimensional shape of each individual loop. But the consistent results have convinced the authors that the STEREO data indeed "allow to obtain a reliable three-dimensional reconstruction of sufficiently bright loops."

In some cases, this structure differs markedly from field lines calculated from a surface magnetogram that the SOHO spacecraft had made just 9 seconds earlier. So there's clearly something else going on.

On August 1st of this year, Earth will get the first total solar eclipse of the STEREO era, which will allow observations of the corona at all scales from three vantage points for the first time. The angle between the STEREO spacecraft increases by 45 degrees per year, so the geometry will be different (and direct visual identification of the same loops in both images will be even harder). But now that the basic analysis procedures have been validated, everyone who sees the corona with their own eyes can hope that after they return from Siberia or China, they will eventually get the full 3D picture too.